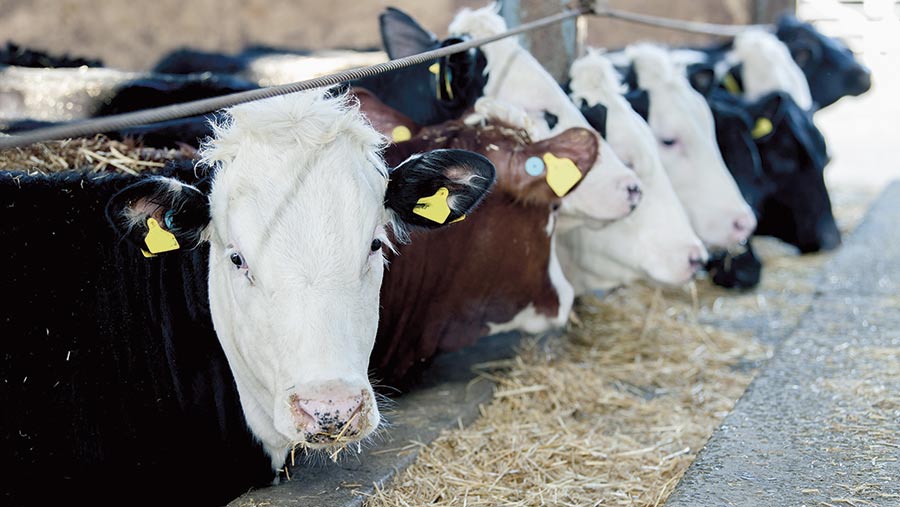 Food retailer the Co-operative Group is expanding a calf scheme that integrates its dairy and beef supply chains.

The scheme provides an outlet for all dairy/beef calves, including dairy bulls previously deemed worthless, with dairy farmers receiving market value for these animals.

Calves from the Co-operative Dairy Group (CDG) farms are collected and distributed to dedicated rearing and finishing farms so the animals are retained within the Co-op supply chain.

The number of dairy farmers supplying calves into the scheme has risen from 41 to 74 since the project’s launch in 2015.

Co-op senior agriculture manager Harriet Wilson says the retailer is looking to grow the scheme further and roll it out across more of its CDG farms.

Rhian Price visited one rearing farm and one finishing farm taking part in the scheme to find out more about the reasons for its success.

See also: The benefits of the Co-op calf scheme

The Co-op launched its Integrated Calf Scheme as part of a commitment to improving product quality and traceability and to address animal welfare issues.

The scheme, which is part of a combined project between the retailer’s milk processor, Muller, and its two beef suppliers, Dunbia and ABP, connects dairy farmers in the Co-op’s Dairy Group (CDG) with its beef producers to ensure calves from dairy farms are retained within its own supply chain when they might otherwise be disposed of.

The Co-op says it creates a much more secure beef supply chain, with more than 50% of its beef coming from the UK dairy herd.

Rearing and finishing farm performance is benchmarked so farmers can see how to improve their operations, and killing-out performance is fed back to the dairy farmers.

Currently, antibiotics use is not passed back down the supply chain to the dairy farmer. But this data is being captured and could be used in the future to identify areas to help improve calf health on dairy farms.

Read the case studies of a beef finisher and a calf rearer. 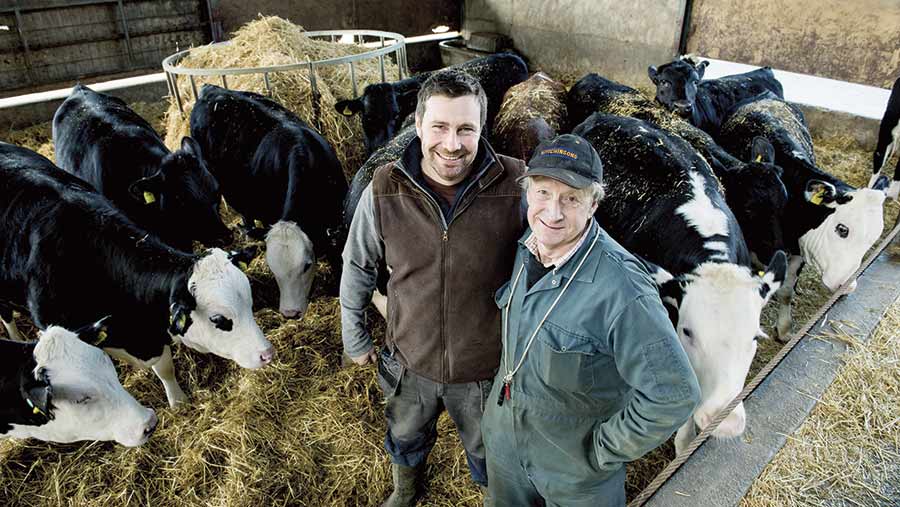 His 243ha arable family farm hadn’t had cattle on it since the foot-and mouth outbreak.

But after returning home to help run the farm nearly six years ago, Mr Bowley decided to start finishing cattle for Dunbia to utilise the farm’s sheds.

He took his first batch of cattle in September 2016.

The move back into beef has also coincided with a switch to growing spring barley in order to control blackgrass.

Home-grown barley now makes up the main ingredient of the diet, in order to try to keep costs low.

Mr Bowley, who farms alongside his father, Ray, says the cattle have been a good fit for the arable enterprise, with cattle work dovetailing nicely with fieldwork.

Cattle start leaving in April so this fits around harvest and the busier months well, Mr Bowley says.

“I didn’t want our labour to be tied up with the cattle all day, every day. It fits very well. We don’t actually have to spend much time with the cattle.

“We check them twice a day, bed down three times a week and it takes 20 minutes to feed out.”

Cattle are supplied by Dunbia but Mr Bowley must buy all feed and cover expenditure on bedding, veterinary services and medicine.

He is paid a set price per kilo. This is based on a 300-day finishing period – so if Mr Bowley can get animals to target weight quicker than this, he makes more profit.

Mr Bowley is therefore targeting a DLWG of 1.75kg with his new arrivals and he is looking to finish the animals as close to 12 months of age as possible. 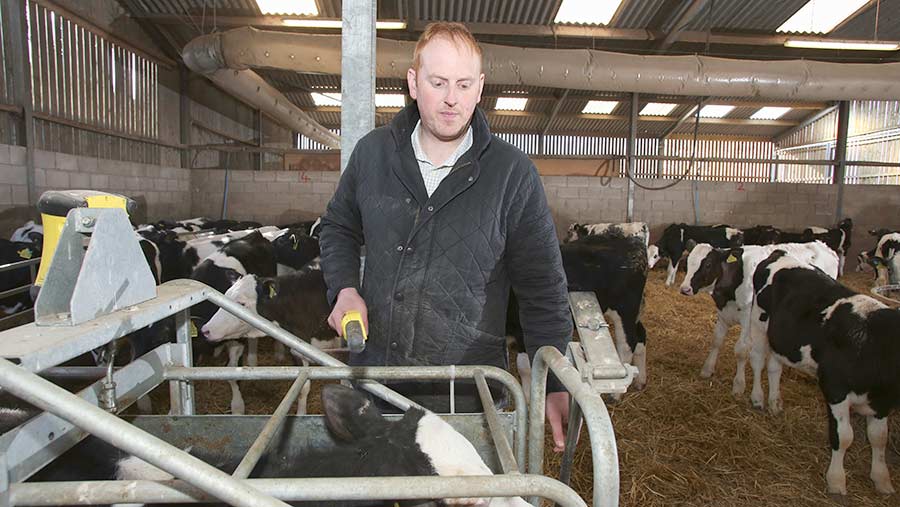 Martin Edwards says becoming a dedicated calf rearer has enabled him to make farming pay with a relatively small land base.

Mr Edwards joined the Co-op scheme in November 2015 and has now reared more than 2,000 calves.

He is paid a set fee per animal by Dunbia, with bonuses paid for hitting growth targets. Dunbia supplies the calves, but he has to buy feed and bedding and cover veterinary and medicine costs.

“It provides cash flow. I don’t have a lot of capital tied up because Dunbia buys the calves,” says Mr Edwards.

Thanks to exceptional attention to detail and good stockmanship, calves are achieving a DLWG of more than 1.25kg on average – above industry targets of 0.85kg.

Each calf is EID-tagged, with treatments and weight tracked throughout the rearing phase.

Dunbia has funded half the cost of the equipment, with Mr Edwards paying for the remainder.

It enables Dunbia to track calf performance remotely, with antibiotics use reported back to the Co-op.

The aim is to provide data to drive improvement throughout the entire supply chain so that areas of development can be identified.

“We are aiming to link up dairy farmers with that data,” explains the Co-op’s Harriet Wilson. “We have a long way to go on that journey but it’s something we want to do to help improve the supply of calves from the dairy farm.”

“You are programming that animal to perform throughout its life in the first three weeks.”