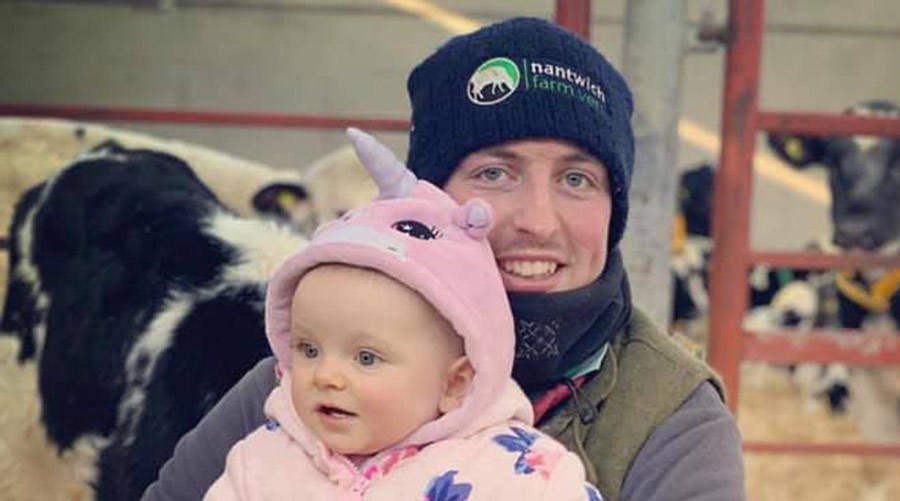 The farming community has rallied round a devastated young livestock farmer who has been left more than £31,000 out of pocket following the sudden closure of Beeston livestock market.

Ben Paterson, 28, from Cheshire, took out a number of loans and had spent two years getting his dairy calf-rearing business up and running with help from his girlfriend Jesamine.

He also took on a milking job from 4am to 8am and had to rush home to take over babysitting duties with their 16-month old daughter, Brooke, while his girlfriend rushed off to work.

Mr Paterson reared his first batch of calves at Blackthorn Farm, an equestrian operation run by his mother Louise in Mobberley, Cheshire, and “learned from his mistakes”, selling a second batch of 60 calves to Beeston auction mart.

Writing on the Blackthorn Farm Equestrian Facebook page, Mr Paterson’s mother said he could not even afford a haulier, so he spent two days in June driving back and forth delivering his 60 dairy bull calves to Cheshire auctioneers Wright Marshall, at Beeston Castle.

“All 60 sold perfect price. Finally Ben had done it,” she said. “He had managed to earn enough to buy the next months’ feed in hand.

“Things were finally looking up. I can tell you we all said ‘cheers’ that night, as it had been a long hard few months.”

Mr Paterson had also agreed to sell a third batch of calves to Beeston.

But on Wednesday 26 June, Cheshire auctioneers Wright Marshall announced that they had entered administration following a “period of challenging trading”.

Mr Paterson’s mother said: “Now they had shut them down, which meant one thing – we would not get paid.

“Ben was owed more than £30k, that was his world, he still owes most of it, but now he is never going to see it.”

She added: “My son and his girlfriend are hard workers and will manage somehow to put food on the table for their little girl who is 16 months old, because that’s what you do.

“It’s the mental health and pressure on us all that has been affected. I hope and pray this doesn’t happen to anyone else. I want justice.”

Mr Paterson’s story has prompted a remarkable response from the farming community.

His mother has set up a GoFundMe online fundraiser, which, as of Tuesday (2 July) had received £11,488 in donations from 574 people.

The Facebook story has been shared more than 2,600 times and received 1,400 comments.

Mr Paterson said he did not hold out much hope of being paid the £31,399 he is owed, but had been “overwhelmed” by the response of the farming community to his plight.

“I didn’t think I wanted to do it again. But the response from everybody has certainly made me change my mind.

“One person commented on the GoFundMe page, ‘We are farmers. We stick together.’ That sums it up. It has left me lost for words.”

The closure of Beeston mart has led to the redundancy of 37 staff and left Cheshire without any livestock auction markets operating in the county.