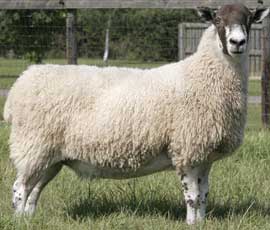 With many farms suffering from insufficient grass growth and the effects of last season’s disastrous weather still evident, sheep producers are being urged to condition-score ewes post-weaning to safeguard performance ahead of tupping.

Independent sheep consultant Catherine Nakielny, who carried out the trial of more than 2,500 ewes across Wales, said ewes should be split into groups as soon as possible post-weaning to actively manage condition.

Ms Nakielny said the best starting point was to condition-score ewes and split them into lean, fat and maintenance groups. From there she said a plan should be devised to prioritise grazing for leaner ewes.

“It takes much more energy to put on condition than maintain it. Rotational grazing can help manage ewe condition score. Provided sufficient dry matter is available, graze lambs first and then follow with a ewe group. Lean ewes should always have access to new grazing ahead of any other groups of ewes, but sward height levels should not be taken too low to avoid reductions in subsequent growth.”

She said one option could be to rotationally graze pastures, starting with finishing lambs and then following with lean ewes. If sufficient dry matter remains fat ewes could also be included in the rotation.

“This will get the fat ones working to clean up pastures,” she explained.

Ms Nakielny said there were no hard and fast rules, but grass growth levels and dry matter requirements would ultimately define movement dates.

If there are limited options for running three groups, Ms Nakielny suggested splitting leaner ewes into a separate group and running above-target and at-target ewes together.

She said planning ahead would enable farmers to create a forage budget for the remainder of the season and make key sale decisions to alleviate potential forage shortages.

“If insufficient feed is likely, consider your sales strategy, including the time of selling cull ewes, selling lighter lambs and selling lambs as stores,” she added.