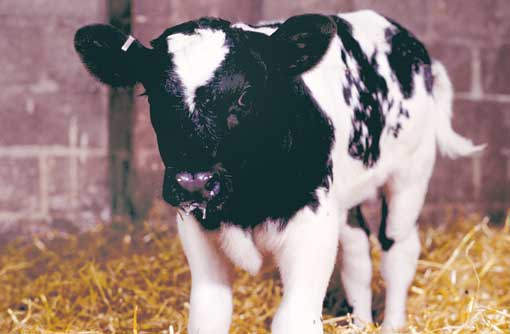 Running a dual enterprise – beef and dairy – has paid dividends for one Scottish farming family, who run a beef finishing enterprise for progeny out of their 450-cow milking herd.

In fact, to ensure the family is not purely reliant on income from milk, the Cuthbertsons have always finished beef crosses out of the Holstein Friesian dairy herd at their three-farm partnership – Drummuir, Tannacrieff and Middletonhill – based near Kilmarnock, Glasgow.

Willie Cuthbertson, who runs the Drummuir part of the enterprise, says: “Most farmers are either all dairy or all beef, but we have always done both.

“The beef enterprise is just another part of the business, and we look at it all in terms of total income. But it has been a bonus this year because the prices have been so good. I got an average of £1,360 for the last 10 I sold – they are worth a lot of money.”

Mr Cutherson says: “British Blue semen is the only thing we can use to get a backend on the bullocks; we started out originally with Limousins, but the calves started to get too much like their mothers and they were too narrow at the back.”

He says both heifers and steers are achieving a carcass weight of between 380kg and 400kg, with two-thirds achieving grade R and the remaining third grade U.

The Cuthbertsons aim to maximise the use of semen on their three farms – all maiden heifers are served to sexed semen and followed up with an Aberdeen Angus sweeper bull. The best cows are selected for sexed semen, with the rest going to British Blue.

Mr Cuthbertson says: “The vet comes in and PDs them every month, and any cow that has not been found in heat will be given a CIDR if necessary. I will start artificially inseminating them 45 days after calving, and I am trying to breed a cow that will last and milk well.”

Commenting on the breeding strategy, Mr Kennedy says: “The advantage of sexed semen is that you can be really selective about what cows you choose to breed replacements from.

“And by using it on all the heifers and a good proportion of the cows, the Cuthberstons are maintaining a steady stream of replacements. We guarantee 90% of calves born from sexed semen will be heifers, and by using it as opposed to conventional semen, dairy producers are increasing calving ease by 1.7%.”

All youngstock – replacement dairy heifers and British Blue and Aberdeen Angus crosses – are treated the same during the early stages.

And the Cuthbertsons ensure all calves are given two litres of colostrum in the first six hours after birth, before being fed their mother’s milk for the first three days and thereafter being bucket-fed milk replacer.

When housed, the beef stores are fed on a mainly barley-based diet, which is grown on the farm and crimped.

The beef crosses are only separated from the replacement heifers when they are turned out to grass, with the animals batched roughly into age groups in paddocks around the farm.

Mr Cuthbertson says: “We are calving all year round so there is a steady supply of cattle going to the abattoir. The animals have a summer out at grass, and we start putting them onto a concentrate mix just before they are two years old.

“They are usually sent away aged between 24 and 28 months old, mainly because we feel the animal is not mature enough before that age to get the finished weight on it.”