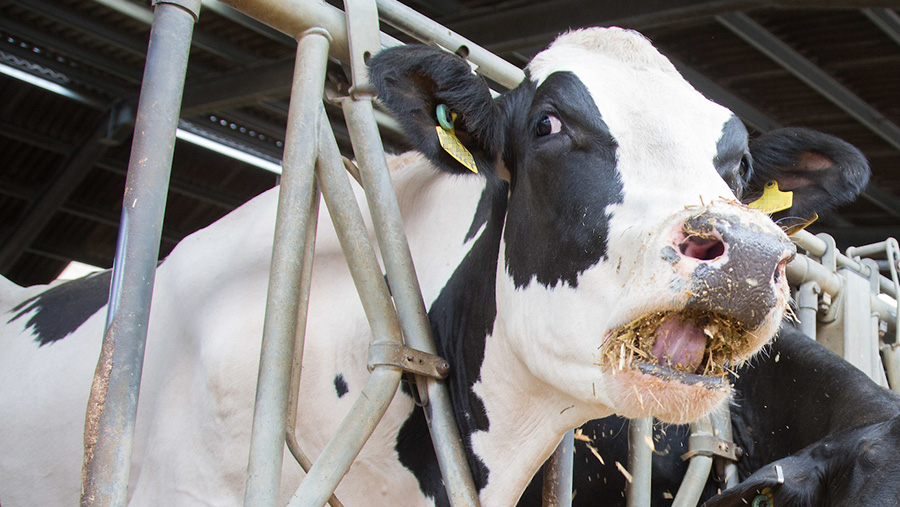 Dry and early-lactation cows fed “yellow” diets are lacking antioxidants that play a vital role in fertility, according to a new farm survey.

The survey was carried out on 10 farms in the South West by Molecare Farm Vets and animal nutrition company DSM.

See also: How a dairy farm lifted pregnancy to 31.5% through nutrition

The only dairy herd in the survey on a grass silage-based ration was not deficient in beta carotene at any point, while all the farms feeding yellow diets, where antioxidant deficiencies were found, were already supplementing with vitamin E.

The results are in line with other research findings, which highlight an increased risk of vitamin E and beta carotene deficiency in housed systems feeding yellow diets made up of more than 50% maize, straw and wholecrop. Compared to grass-based diets, these forages tend to be low in key antioxidants.

The correct supply of vitamin E and beta carotene is vital considering the role they play in fertility, according to vet Andy Adler of Molecare Farm Vets.

“Antioxidants are involved in protecting the body’s cells from detrimental chemicals that are produced in response to normal insult and trauma seen around calving,” he explains.

“If these chemicals aren’t removed, they can have a negative impact on bodily tissues, and particularly those involved in fertility, such as the growing oocyte [egg].”

Antioxidants help counteract these chemicals and protect the oocyte – which starts to develop 100 days before a cow comes into heat.

The survey shows it is worth increasing supplementation around calving to raise blood levels and help prepare the cow for increased demand when she calves, says Mole Valley Farmers’ mineral supplements technical manager, Jamie Gibbons.

“Supplementation with key antioxidants – including vitamin E and beta carotene – during the dry period and up until the cows are served will give the best protection for the developing oocyte so it is ready for fertilisation.”

Mr Gibbons adds: “The National Research Council is currently reviewing recommendations for antioxidants and is likely to increase recommended levels in dairy diet.

“Fertility is multifactorial, but optimal antioxidant status is one thing that contributes to better conception rates and more cows in-calf.”