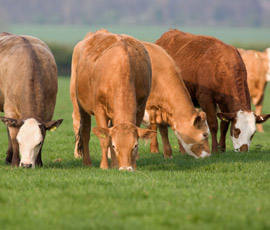 The latest EBLEX analysis has revealed that the average age of first calving for beef heifers in England is 34 months – a figure which has remained more or less constant from 2004 to 2010.

Dr Vickers said: “Calving later than two years of age potentially equates to a loss of productivity, as those females are likely to have fewer calves in their lifetime. It also means more replacements are needed on the farm in any one year, using up resources that could otherwise be used by productive cows.”

She said to reach the 24-month calving down target, producers needed to ensure heifers were served when they had reached 65% of their mature bodyweight to then calf down at 85% of mature cow weight. For example, if a mature cow weighs 650kg, then the target weight for first service at 15 months would be 425kg.

“This requires an average liveweight gain from birth to service of around 0.9kg a day, which should be achievable. In addition to reaching the target liveweight, it is important that heifers have grown sufficient frame and have sufficient body condition (2.5-3) at breeding time. Ideally, they should have had two oestrus cycles before the start of the breeding season,” she added.

She said heifer replacements should be selected on the basis of physical fitness and temperament. And in terms of fertility, only those in-calf after running with the bull for six weeks, should be kept as they have proven themselves as being very fertile.

“The use of an easy calving bull is critically important with heifers to safeguard their welfare and their fertility. Having conceived, it is important young heifers are fed to grow themselves as well as their calf and ideally managed as a group separate to the main herd,” added Dr Vickers.