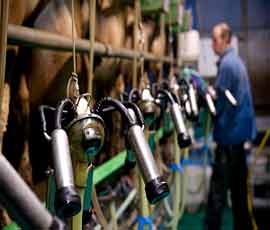 British dairy farmers are being urged to reduce their environmental footprint still further – despite already being among Europe’s most efficient milk producers.

Advances in breeding, feeding and management have seen Britain’s milk yields a cow increase by more than 25% in five years, says a study.

Further improvements and efficiencies would benefit farm businesses as well as the environment, creating a “win-win” for farmers, it adds.

It was drawn up by a taskforce drawn from across the dairy supply chain and currently chaired by DairyCo. Milk yields a cow increased from 5,512 litres a year in 1995/96 to 7,096 litres in 2009/10, according to figures in the report.

“Farmers are achieving similar amounts of milk from fewer animals – and have, therefore, been able to reduce their environmental impact,” it says. “Experience to date suggests farmers can go even further, particularly if incentives and voluntary initiatives are employed.”

Regulatory approaches have a part to play too, the document says. But these should be proportionate and positively promote the desired changes to avoid being seen as burdensome or bureaucratic, it warns.

In addition, some 61% of dairy farmland is managed under environmental stewardship to encourage biodiversity, the report says.

More dairy farmers are adopting techniques such as re-using water from the milk cooling process, harvesting rainwater or installing boreholes.

“Many of these improvements represent efficiency gains, which will have positive impacts on the bottom line of farming business, although most require investment,” he said.

“Dairy farmers are well placed to deliver on this commitment and are already making great strides forward.”

Meanwhile, dairy processors have increased their energy efficiency by more than 27% over the past decade. This has resulted in a reduction in annual greenhouse gas emissions equivalent to approximately 270,000t of carbon dioxide.

At the same time, retailers are implementing systems to reduce emissions from milk transportation.

Farm minister Jim Paice said: “The people who produce, process and sell dairy products are continuing to lead the charge to becoming more sustainable.” He added: “There’s more that can be done, but the industry has shown that it’s up to the challenge.”

The report showed collective action for change was every bit as effective as the heavy hand of regulation, said Mr Paice.