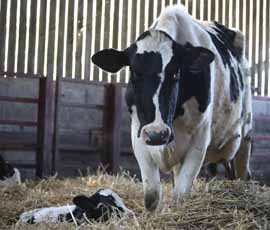 Speaking at the National Herdsmans Conference at Harper Adams University College, Mr Sibley said: “More than half of all UK farmers have expanded their herds by buying in animals, which has resulted in Johne’s entering their herds, and unfortunately it’s five years before we find it.

“And buying in slurry, for example, is a significant biosecurity risk, as the organism can survive in the muck for five to six months.”

To mitigate this risk, he said producers buying in stock should always ask about the Johne’s status of the herds they are buying from, and where possible avoid buying in extra slurry.

“The challenge is buying in animals from safe herds, and I would urge people buying in heifers to ask about the Johne’s status of those herds.”

In addition, he advised producers, where possible, to use individual calving pens as opposed to multiple-calving sheds, as these increase the risk of youngstock contracting the disease from infected cows.

“The newborn calf is the most susceptible to this disease – 80% of all Johne’s-infected animals caught the disease in the first few days of life – so if you are going to stop transmission, that’s where you have got to concentrate your efforts,” added Mr Sibley.

And because there is no cure, he said farmers needed to predict if the disease was going to enter their herds and work to prevent this happening.

“No-one can diagnose Johne’s by looking at a cow – the only way you can find the disease is by going to look for it – and that makes the control of the disease quite challenging for us,” said Mr Sibley.

To ascertain whether or not you have Johne’s in your herd, he recommended testing a group of about 30 cows in the herd which were showing symptoms of the disease such as reduced milk yields and infertility.

“If you find you have got a problem then there is a way out, and if you haven’t got the disease you can look at protecting the herd and work out simple systems to prevent the cows getting it.”

Johne’s Disease: What you need to know…

What is the impact on a farming business?

Described as an “iceberg disease”, clinical cases only account for 5-10% of the problem. And many cows are culled before they get the chance to show clinical signs as a result of increased forced cull rates, meaning the disease often goes undetected.