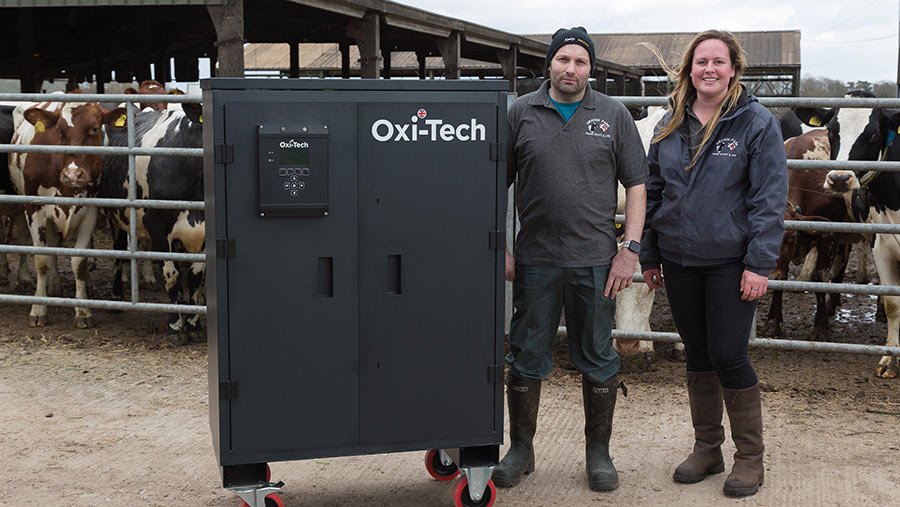 A dairy farm in Norfolk has replaced chemical disinfectants with a system using only water and low-voltage electricity.

This has helped reduce the farm’s carbon footprint, improved cow health, delivered a safer working environment and made savings on dairy maintenance.

The on-farm, chemical-free dairy disinfection system has been developed by Oxi-Tech Solutions. It produces a biocide using a natural process called ozonation.

Water is passed through low-voltage electrical cells to produce dissolved ozone, a type of molecular oxygen made in and from the water.

It has made peracetic acid – used in the cluster-flushing system – and sodium hypochlorite – used in the clean-in-place (CIP) system wash – completely redundant in the dairy unit at Pearn Wyatt and Son, Grange Farm, Snetterton.

Oxi-Tech is a “plug-and-play” system providing complete disinfection as and when needed. It comes in a shoulder-high box on wheels, with a digital display, and can be monitored remotely on any internet device.

It can be set up anywhere that is close to a power source and water supply and can be used on any dairy unit with a CIP system. It communicates directly with the parlour wash process.

When it’s switched on – about 20 minutes before each milking – water, held in tanks inside the box, runs through a reactor cell. This causes the bonds between the hydrogen and oxygen atoms in the water to split.

The process of splitting these bonds allows for the formation of trioxygen (O3) molecules, otherwise known as ozone.

The water is pumped through the reactor cell, back into the tank, and back through the cell again, each time splitting more bonds to generate a large concentration of dissolved ozone.

Because the dissolved ozone is unstable, the molecules look for a way to get rid of one of their three oxygen atoms as quickly as possible.

Oxidation is very quick: as soon as another particle – a bacteria or a virus, for example, is located, the third oxygen atom combines with this. The remaining oxygen stays as dissolved oxygen in the water.

“While chlorine kills by poisoning vital cell functions, along with some oxidation, ozone is purely oxidation, which is far more effective,” he says.

“Also, using chlorine leads to an accumulation of [polluting] trihalomethanes in the environment, whereas ozone reverts to oxygen as soon as it’s not being used.”

Mr Rutterford invited Andrew Smith, herd manager of 240 Shorthorns and Holsteins at Grange Farm, to take part in a trial of the Oxi-Tech system.

A prototype of the new system has been trialled for a year on the farm. It has resulted in a number of benefits, and a fully developed commercial version has just been installed.

The unit had been using 800 litres of peracetic acid and 1,000 litres of hypochlorite each year, costing a total of £2,550 annually. These were delivered in 200-litre plastic drums that were difficult to manoeuvre into place and hard to recycle.

“It was a real hassle trying to get rid of the plastic drums,” says Mr Smith. “There are a lot of issues with recycling because they pose a biosecurity risk, and a lot of places are reluctant to take them.”

Some farmers end up stockpiling them on farm, adds Mr Rutterford.

“Our milk is supplied to Morrisons, which wants its network of farm suppliers to be carbon-neutral by 2030,” says Mr Smith.

“Having an anaerobic digester helps a lot in reducing our carbon footprint, but reducing our use of plastics on the farm also helps big time.”

As well as a reduction in plastic, the farm’s carbon footprint is lowered further by removing the need for delivery of chemicals, some of which were being transported from mainland Europe.

Rates of contagious mastitis on the farm are lower than the dairy team has ever achieved, with bactosan readings now more than 25% below the AHDB’s three-year average of 26,667 cells/ml.

“You’ll see a run of same-quarter infections if the system isn’t working properly. We haven’t had any cases since we’ve been using ozonated water.”

As well as savings on mastitis treatment, time is saved handling rejected milk, which eases workflow in the parlour.

Potential injuries from contact with chemicals for disinfecting have been eliminated.

Molly Sellars, the farm’s youngstock manager and relief milker, is particularly pleased that the farm has embraced the new technology, having previously suffered burns to her leg while handling peracetic acid.

“It’s cleaner and safer now, because there is no risk of getting splashed with chemicals,” she says. “It makes for an easier working environment.”

Dump-buckets, used to divert colostrum from newly calved cows or milk from cows being treated with antibiotics, are then disinfected manually.

Previously, this process involved handling chemicals and so carried a risk of injury to the operator. Now, any spillages or splashes are harmless, because any dissolved ozone in the water reverts to oxygen.

Split liners used to present a further potential source of injury, as the disinfecting solution tended to spurt out through any perished rubber, says Mr Smith. That risk is now avoided.

In addition, replacing damaged pipes in the eight-year-old parlour was an almost weekly occurrence. And, while repairs could usually be carried out in-house, they were often complicated.

Since replacing the chemical disinfectants with ozonated water, there have been no further pipe breaks.

Mr Rutterford believes this could be down to the neutral state of the Oxi-Tech biocide: peracetic acid has a very low, acidic pH, whereas ozonated water has a pH of 7.

The cost of the Oxi-Tech system depends on herd size and unit setup, as these will determine the number of hours the reactor cell needs to run.

The Oxi-Tech system can be used for other biosecurity applications, such as disinfection of water supplied from a borehole, rainwater-harvesting, drinking water for livestock and hose-downs.