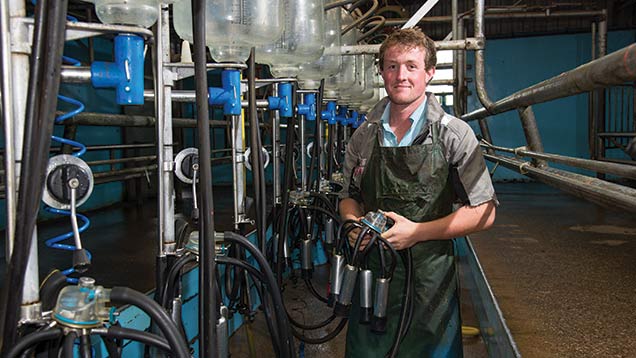 Of late, logging on to Twitter has been a fairly torturous ordeal, with my timeline populated by pictures of medium-sized dogs lost in heavy covers of grass, and happy tweeters basking beside pits full of this season’s first cut silage.

Meanwhile, we have been deliberating over which particular frost-damaged paddock to graze next.

That said, in over-the-fence farming news, some local dairies have now harvested their first cuts of grass, so fingers crossed, we should be in a similar position soon.

Cows have been milking well, with the herd peaking at more than 28 litres, with solids consistently up at 8%.

Miraculously, most of the milkers appear to be holding condition well, so should be in a reasonable energy status as we get stuck into mating.

AI has got off to a good start. A synchronisation programme for a handful of non-cycling cows meant we had 15% of the herd mated in the first two days.

Bulling activity has since been a little quieter, but perhaps this should be expected as we moved the planned start of mating forward by one week and additionally bought in a group of cows calving at the back end of our block.

It remains to be seen if this decision to bring forward calving in 2016 will be a good one, but we are fortunate to be well set up with infrastructure so that we can manage if spring growth is slower than expected.

At a recent discussion group meeting, conversation centred around what might change if milk prices fell into the mid-teens.

There was a range of suggestions around strategies to reduce feeding and breeding costs, as well as culling lower-performing animals and reviewing heifer-rearing practices.

However, it is relevant to frame this gloomy conversation within the context of a previous discussion around opportunities that the present industry turmoil might create, and how best to capitalise upon any that may arise.

Nonetheless, with cattle prices still reasonably buoyant, it would appear there has not yet been a mass exodus, so it will remain to be seen what form, if any, expansion opportunities may take.

George Brown won the Farmers Weekly Apprentice in 2012. After a stint working on dairy farms in New Zealand he has returned to the UK and is now managing the 330-cow dairy herd at Cairnhead Farm on behalf of Robert Craig.