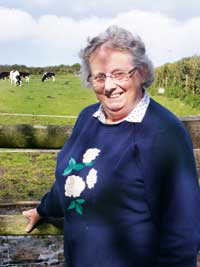 Dairying is in Sheila Dark’s blood – the daughter of a dairyman with milk rounds in Kent, she went on to marry a dairy farmer and is still in the industry, age 72. “I took my driving test on an electric milk float – it wouldn’t be allowed these days,” she says.

Born in Sevenoaks in 1937, Sheila took a secretarial course after leaving school with the intention of working in London. “But my father asked me to help out with the milk round, and I thought it was great – I didn’t really take to secretarial life.”

Working almost seven days a week on the round, Sheila joined Wrotham and District Young Farmers Club, where she met her future husband, John.

“We got married in October 1963 – the same year as five other couples from the same club – and we’re all still in contact.”

John was a tenant dairy farmer at Moat Farm on the Chevening Estate, Chipstead, where his family farmed for 149 years.

With 80 milking cows on 220 acres, the couple threw themselves into farming life, before the birth of Charles, the first of four sons, in 1971.

“In 1972, I helped to form a Womens’ Institute branch – we were all young mothers and felt we needed an evening out on our own,” says Sheila. “We had a lovely social life, as well as a bit of education – and I’m still in touch with those friends now.”

In 1979, a group of women in Kent formed the Women’s Food and Farming Union (WFU), to protest against the dumping of French apples on UK markets. Sheila soon joined in a bid to promote quality British farm produce.

“I got on the committee and they then asked me to be dairy representative, which meant lots of meetings in London, educating and lobbying on behalf of milk producers.”

However, in 1986, Sheila and John’s landlord asked them to surrender their tenancy so the farm could be sold off, promising compensation to help them find a suitable alternative. After searching much of the country they opted for Trudnoe Farm, Mullion, Cornwall – a 277-acre dairy farm for sale with 30 cows.

Sheila and her three eldest sons – now in their late teens – moved to Cornwall in November 1988 with the first batch of cows and machinery, leaving John to bring the second consignment down afterwards. “We brought 60 cows plus youngstock, and 90% of the machinery, so it was a big move.”

As well as the cows, the farm came with 20 acres of cauliflowers ready for cutting. “We had to call on some local help to understand what we had to do.” For the next five years the family grew spring greens instead, which were cut by the men and packed by Sheila and her daughter-in-laws. “As the cattle numbers increased, something had to go – and I was quite glad to give up the packing,” she admits.

In 1989 she helped set up Cornwall’s first WFU branch, becoming joint chairman. “We felt it was worth promoting local and British produce, and linking producers and consumers to make people realise what great food we have got.” The branch has gone from strength to strength, and now boasts a huge presence and food tent at the Royal Cornwall Show each year.

A keen cook, Sheila bakes cakes for charity fundraisers, and is also secretary of the Gunwalloe WI branch. “There are a lot of farmers’ wives involved – we like the social side. It’s a good way to get away from the farm and to meet other people.”

She also ran bed and breakfast in the farmhouse until about five years ago, when they built an annexe to move into so that all three families could live on the farm. “It was hard work but I made a lot of new friends – and all the money went on improvements to the house.”

While Sheila ran the B&B, John and their sons Stephen and Richard expanded the dairy unit to 180 milking cows plus youngstock. Renting an additional 200 acres they also run a contracting business, and sell up to 30 pedigree heifers each year.

Although Sheila has always done the books, she prefers to remain less hands-on when it comes to the dairy. “I’ll help to move the cows and feed calves, but I’ve never put on a milking cluster – I’ve always said that’s the start of another job that I don’t want to do!”

Although farming has changed significantly over the years – yields have increased from below 5000 litres to 9000 litres today, and machinery and equipment has grown bigger and better, neither Sheila or John hark back to the old days.

“To a certain extent things have become easier – and you’ve got to move with the times or you get left behind,” says John.

Despite moving away from their Kent roots, the couple couldn’t be happier. “Moving to Cornwall and securing a future for our two sons in farming was a highlight – you feel that you’ve achieved something,” says Sheila. “With nine grandchildren and one on the way, our greatest ambition is for the families to work well together.”

The grandchildren certainly have some excellent role models. “I would be completely lost without Sheila,” admits John. “Like many farmers’ wives she plays a very important role in the business – I’d be totally at sea without her help.”