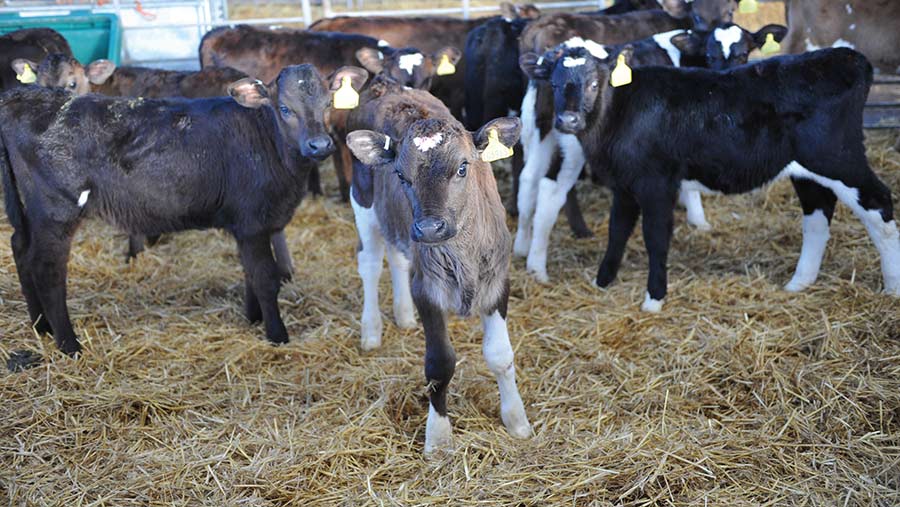 Producing a viable dairy bull calf is a challenge in a system that relies on an efficient cow of smaller stature to maximise milk production from grazed grass on the shoulders of the season.

But it is one that spring milk producers will need to address ahead of 2023, when new Red Tractor assurance standards kick in to end the routine euthanasia of bull calves.

Regardless of the financial implications, all calves will need to be reared with care by 2023. This is according to Gwyn Jones, who chairs a cross-industry group researching key areas such as improved breeding to produce animals that can be reared efficiently and profitably.

He hopes spring-calving herds will see the change as an opportunity and embrace better genetics from the beef sector to produce better calves.

“We have British Blue calves from cross-bred cows on trial, and we believe they will make beef specification,” he says. “This is a short-gestation bull with easy-calving traits, but rapid muscle growth once born.”

“Calf rearing could also be a pathway into farming for new entrants without the need for land.”

Below are four areas to consider ahead of the industry-wide commitment to rear all calves with care by 2023.

Sexed semen increases the likelihood of producing a heifer calf to more than 90%, compared with 50% in conventional mating. A sharp rise in its use in breeding programmes in spring herds is expected ahead of the 2023 calving season.

The AHDB’s Stephen West recommends the Herd Genetic Report, available from the AHDB to all milk-recorded herds. This can be used to establish which cows in a dairy herd are genetically superior and to plan for heifer replacements from these cows.

Giving calves the correct start is essential, whether they are to be kept as herd replacements or grown for beef. Ensuring they grow well for the beef finisher is key to securing a continuous sales outlet, says Mr Buitelaar.

The principle of rearing calves with the upmost care includes giving them access to good-quality colostrum at birth and using vaccinations to protect against respiratory diseases and other issues.

To achieve the aims of the dairy bull calf strategy and produce marketable calves, some spring-calving breeding programmes will need to evolve and select appropriate genetics to produce viable calves for the dairy and beef supply chains.

Progress in fertility, calving ease and feed conversion ratio genetic traits is widening the options for producing marketable animals that offer benefits at all stages, including at a farm level.

Breeding companies have developed indexes that show the additional financial benefit a sire can deliver when compared with the average of the same breed. For example, Genus’s BeefAdvantage Index allows spring block-calving systems to select sires with the desired traits for their herd.

Add a TB breakdown to the mix and there is a risk of animal welfare issues.

Calves can be sent to a TB isolation unit (TBIU), which is designed to provide an outlet for calves or store cattle from TB-restricted holdings lacking the facilities for rearing.

But TBIUs can only source cattle from a single TB-restricted holding. There is also a limited time period for stocking these units, as well as certain conditions for approving applications for them.

As calves destined for AFUs are finished indoors, systems expecting to be under TB restrictions are advised to use genetics suitable for intensive indoor production.

This tends to rule out native breeds, says Mr Jones.

Securing a licence to move calves isn’t a given – dairy farmer Abi Reader, whose herd is currently subject to TB movement restrictions, says only 40% of the applications she has submitted have been approved.

Ms Reader, who is also a member of the Ruminant Health and Welfare steering group, advises that pre-planning movements is vital.

“Be timely with a licence application, to give the Animal and Plant Health Agency a chance to consider it. There is a seven-day timeline for them to do that,” she says.

Good communication with an AFU operator is important, too, she adds.

“Get a dialogue going to establish when they are opening their doors, as they don’t have an intake every day.”

The main criteria for marketable beef are provenance, size and shape and eating quality.

Suitable size and shape are where cross-bred cows in spring-calving herds often fall short, but this can be overcome by increasing cow size to about 500kg, says Adam Buitelaar, chief executive officer of the Buitelaar group.

“A bigger cow is going to produce a bigger calf, it’s as simple as that,” he says. “A 420kg grazing cow will never produce a calf with a carcass suited to the supply chain.

Mr Buitelaar advises using bulls with known traits – sires that are easy-calving but also have shape and size. However, they should not be selected solely on their easy-calving credentials.

There is a good future for dairy beef, he says. “If farmers consider cow size and the sires used, the selling of meat from calves out of cross-bred cows will be no problem.”