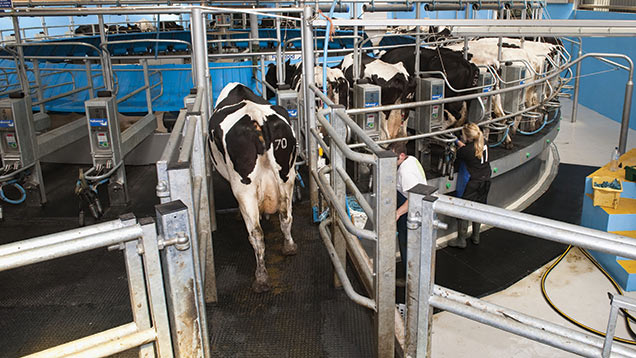 Dairy industry leaders insist there is a future for Britain’s family farms – despite warning that milk producers face one of the biggest crises the sector has seen.

Milk price cuts have now wiped off more than £800m from 13,000 dairy farm incomes during the past 12 months, said the Royal Association of British Dairy Farmers (RABDF).

But while nine farms were leaving the sector every week, it said there was a future for those able to ride out the slump.

“I would like to see more attention paid to calf and heifer rearing – and reducing replacement costs,” Mr Everington told reporters on the first day of the Livestock Event at the Birmingham NEC on Wednesday (8 July).

“That is a good effective thing you could do tomorrow.”

But the RABDF has also warned that it is becoming increasingly difficult for farmers to manage peaks and troughs in volatility.

Farmgate milk prices which exceeded 31p/litre for about six months had been followed by a trough which could last well over 12 months, it said.

For many farmers, cutting costs remains easier said than done.

The cost of production between the best and worst farmers varies by as much as 11p/litre, according to AHDB Dairy director Duncan Pullar.

At the same time, milk prices fall more rapidly than they rise, he said.

A similar point was made by Derbyshire milk producer Richard Morley.

“Every time we cut production costs, the milk price drops,” he said.

“We need action – a lot of dairy farmers in Derbyshire are on their knees and I’m one of them.”

Exchange rates are adding to the pressure.

“Things are going to be tough for a while,” he said.

“It is essential that costs of production are as low as possible.”

“The milk price was 30p/litre two weeks before we started.

“Now it is 22p. We’re surviving – we’ve two robots milking so there are no wages to pay and we’re constantly trying to get the best deals from suppliers.”

Margaret Vale, Suffolk: “We’ve put in a new parlour and we’re expanding the herd from 250 to 300 cows this coming winter.

“We’re cutting costs by moving to open calving and a more grass-based system on marshland, feeding TMR in the winter.

You’re either in dairying or out.”

“There’s not much you can do about it.

“The situation in Greece and the way it affects the euro exchange rate could have a big impact on support payments.

“The main thing is to keep everything as cheap as possible.”