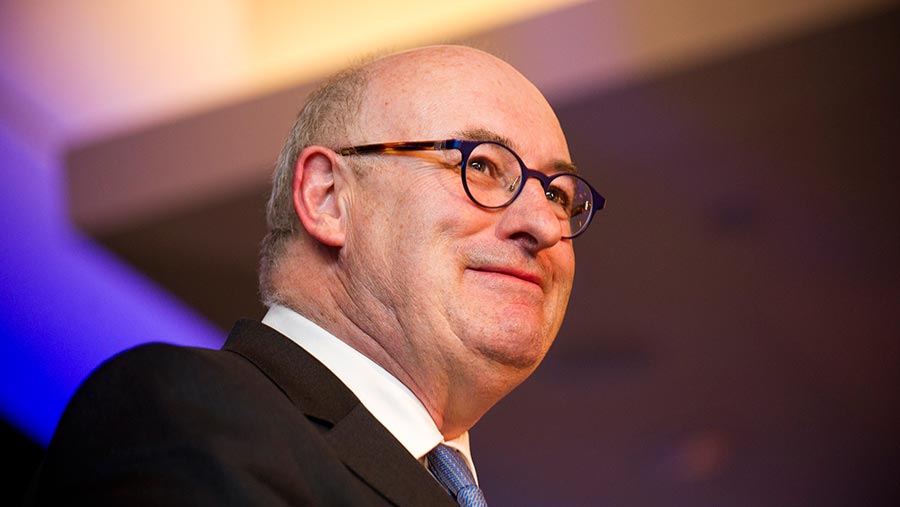 Leaving the EU customs union will put the UK at a major disadvantage after Brexit, and all sides will have to work together to try to mitigate the damage, according to EU agriculture commissioner Phil Hogan.

The EU has 53 free trade agreements around the world, directly or indirectly involving 138 countries, he told dairy industry representatives at this week’s Dairy UK annual dinner.

“Leaving the customs union risks that agriculture will be sacrificed in any future trade deals signed by the UK, in my view,” said Mr Hogan.

“The reality is that, in trade negotiations, size matters. I know there was a big effort [for the UK] to get a quick deal with the US in a fit of pique last year.

“But in another fit of pique, the US said they wanted to do business with Europe first, because it happened to be a bigger market.”

Mr Hogan said the EU Commission will do everything in its power to retain a strong, healthy and productive relationship with the UK dairy sector.

“Everybody on both sides must have an open mind as to what those solutions are and not be painting red lines before the negotiations even start.”

The importance of dairying was stressed by Dairy UK chairman David Dobbin, who was also concerned the sector might be forgotten about or traded away in negotiations to the benefit of other sectors.

“The government must avoid a cliff edge deal and go for a lengthy transition to allow a deal to be finalised and seamlessly phased in.”

Oliver Hogan, director of the Centre for Economics and Business Research, said the UK faced a trade-off between autonomy and market access.

“In essence, the more rigid the UK is on its red lines, the more it can expect to have to move away from unfettered single market access, as it exists today,” he warned.

“But if done in the right way, many Brexit-related worries could disappear. Making this happen will require careful and tolerant negotiating behaviour on both sides, something that has been conspicuous in its absence in recent months.”

Hogan recognised for services to dairying

EU agriculture commissioner Phil Hogan was one of two so-called “dairy champions” to be presented with a Dairy UK Award at the dinner. According to Dairy UK chairman David Dobbin, the award recognised Mr Hogan’s “advocacy for food and farming, which has made a real difference, especially for farmers”.