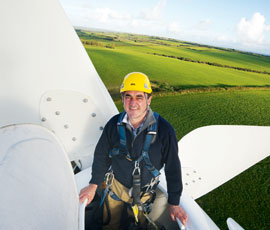 The decision to diversify or expand may be a relatively easy one, but the difficulty comes when deciding how to do it.

One North Devon family recently faced such a challenge and were torn between investing in cows or renewable energy. However, last year they took the plunge and invested in two 55kW Endurance E-3120 wind turbines – among the first such turbines in the UK.

The Pomeroys farm about 1,100 acres and milk 760 cows on two units with father Alan, sons Steve and Geoff and son-in-law, Will.

“Before installing the turbine we discussed whether to put the investment into expanding the herd with more cows and buildings, but we felt the turbine was a stronger and more secure option, particularly with the current volatility in the dairy industry,” explains Steve Pomeroy.

Mr Pomeroy first started looking into installing a turbine about 18 months ago and worked with Kite Consultant Paul Fox on the project.

On this occasion the planning process was fairly straightforward, with planning being submitted in February 2010 and the turbines being installed in mid-September. However, this is not always the case and is far from the only factor to consider, says Mr Fox.

“People often start with planning permission, but while that is obviously important there are more significant issues to consider,” he explains.

The first thing is whether you’ve got sufficient wind. “It might seem obvious, but when your site isn’t windy enough then the payback will be extended and the project might not be worthwhile.”

As a guide, wind speeds in excess of six metres a second are required and Mr Fox recommends the installation of an anemometer for four to six months to give an accurate idea of wind speed at your site.

The next key issue is grid connection. “Without a connection to the grid the project can’t go ahead. For a turbine of this size you’ll need a three-phase connection and when this isn’t already on farm then it can be expensive to bring in – it is worth speaking to your local power distributor to get an idea of feasibility and cost.”

Only once wind speed and grid connection are assessed should planning be considered.

Wind speed wasn’t a concern for Mr Pomeroy as winds from the nearby North Devon coast buffet both sites. However, grid connection did create some issues.

“The cost of getting three phase installed didn’t affect the viability of the turbine project as we needed to do it anyway to run the parlours and bulk tanks. But the logistics of trying to get it organised proved both time consuming and very stressful,” he says. “I would certainly recommend getting it installed much earlier in the process than we did.”

So has installing the turbines been worthwhile? The answer seems to be a definite ‘yes’, although the process hasn’t been without its pitfalls.

“The turbines have been reliable so far and although we have had some minor mechanical teething troubles they have been fixed very quickly,” Mr Pomeroy says.

“And they are certainly meeting our expectations in terms of energy generation. Altogether we have produced 150,000 units of electricity in the first six months.”

In terms of benefits then, the figures look compelling. Electricity bills at the Pomeroy’s Wedfield and East Greadon Farms have been reduced by 50% and the income from Feed in Tariffs is currently averaging £200/day – payment that is guaranteed by the government for 20 years.

Overall, this means the investment of £500,000 (for two turbines) should be paid for in six to eight years, depending on wind conditions. But while this looks attractive, caution is required as cashflow can be difficult, Mr Pomeroy warns.

“We have not received any income from the turbines yet as you have to apply for registration from OFGEN, which can take up to six months, and you can’t apply until the turbine is commissioned. That needs to be factored into the business plan as the investment still needs funding during that initial period.”

But, with the first payment due any day, Mr Pomeroy is positive about the decision to invest in wind power.

“Overall, I am pleased that we installed the turbines, but sometimes it has felt like the easy part was getting them flying – we under-estimated the amount of time it takes to deal with OFGEN and the power distribution companies. Otherwise, I wouldn’t change anything – they bring useful additional income without affecting our farming practices at all.”