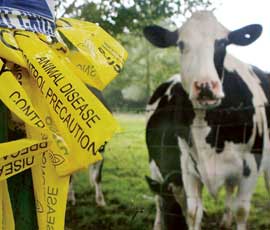 A foot-and-mouth vaccination programme could prevent a repeat of the economic losses, social upheaval and psychological trauma caused by the disease in 2001, according to scientists.

Veterinary virologist Peter Nettleton told a landmark event at the Moredun Research Institute near Penicuik, Scotland, that vaccination was the modern alternative to mass slaughter seen in the outbreak a decade ago.

“Detailed pre-outbreak planning is essential to minimise the effects of what can be a devastating disease,” she said.

Moredun fully supports the results of the official enquiries into the 2001 outbreak, which recommended strongly that future contingency plans should incorporate emergency protective barrier or ring vaccination.

“This is an adjunct to the slaughter of clinical cases, as this would lead to a considerable reduction in the number of animals requiring to be slaughtered.”

NFU Scotland president Nigel Millar, who is also a vet, said there was a real opportunity to build flexibility into future contingency planning to allow the industry to make improvements and avoid the tragedy of 2001.

“Fundamentally, we must find a way to avoid the scenes of mass slaughter of 2001.

“The economic disruption caused by culling livestock from huge areas, and the scars that left on both individuals who were directly affected and the wider countryside, is not something any of us want to see again,” said Mr Millar.

“It is our duty as an industry to equip ourselves with the tools to ensure those scenes are not repeated,” he said.

The conference was organised by Moredun Research Institute, the Scottish Government, and NFU Scotland.