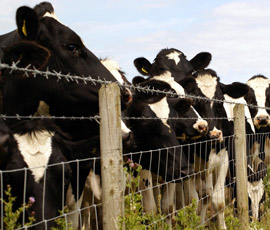 Farmers are benefiting from a new integrated approach to tackling the escalating problem of bovine viral diarrhoea (BVD) in Welsh herds.

The true extent of BVD in Wales is unclear as it is not a notifiable disease, but it affects as many as 80% of UK herds.

In acknowledgement of the serious economic implications of this disease, BVD is now on the Animal Health and Welfare Strategy Steering Group’s disease priority list.

During an interview with Farmers Weekly at the Royal Welsh Show, Wales’ chief veterinary officer, Dr Christianne Glossop, said a series of initiatives were in place focusing on BVD.

Workshops and meetings had been initiated through Farming Connect and other organisations to make farmers, vets and farm advisers aware of BVD and how to eradicate the disease.

Dr Glossop believes there is a case for extending the strategy with a joint BVD mechanism between Wales, England and Scotland. With so much movement of animals between the different countries, there was a case for a joint approach, she said.

“Wales, England and Scotland are going in different directions on their BVD strategies, but it is important we have a mechanism for sharing information,” said Dr Glossop. A new framework to deliver this approach is currently being examined.

Although England benefits from a pot of money specifically allocated to BVD eradication measures, funding in Wales is drawn from the single-budget Rural Development Plan. With Wales about to reshape its Pillar 2 structure, Welsh farmers believe ring-fencing funding for the control of BVD and other economic diseases is now necessary.