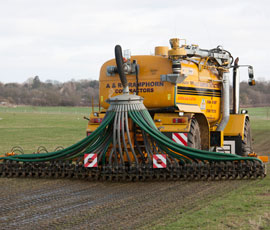 Time is running out for farmers to lodge an appeal against Nitrate Vulnerable Zone designations.

The positions of NVZs are reviewed by DEFRA every four years and the 2012 round of designations marks some huge changes in zone boundaries.

The overall area of England covered by NVZs will fall from 69% to 59%, which means roughly 10,000 farms will be removed from zones. The decrease, according to DEFRA, is due to a “gradual but clear downward trend in nitrate levels”.

But NFU environment consultant Michael Payne has warned that more than 2,500 farms have been drawn in.

“It is vital farmers check NVZ maps and make any challenges ahead of the 25 September deadline.

“The cost of being included in a zone can be make or break for a farm. Extra storage costs alone make it worth challenging if a farmer believes there is a case for being de-designated,” he said.

The maps showing the area designations were published on 17 May, Mr Payne added.

“These are the definitive proposals which will become NVZs on 1 January 2013, subject to the outcome of any farmer appeals,” he said.

In the previous round 700 challenges were submitted, of which 350 were successful.

There was a wide range of challenges. Some maps had the zone boundary drawn in the wrong place. Others appealed after mistakes were found on the direction of flow of a watercourse or it was clear water had been polluted by another source such as a nearby sewage works.