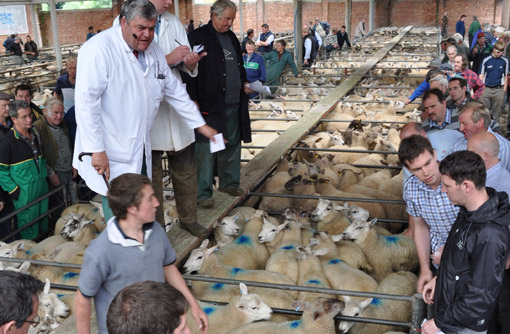 Late season hogget finishing has the potential to be a high earner, as long as opportunities are not missed. Jeremy Hunt reports

As springtime hogget marketing hits lambing time on many farms – and root and forage crops begin to lose their optimum feed value – it’s all too easy to miss the opportunity of premium hogget prices.

Farmers are being advised not to take too much for granted at this time of year. Root crops may look as though they’ve still got plenty to offer but their feed value can easily be over-estimated, says Andrew Morrey, feed adviser with Countrywide Farmers.

He urges hogget finishers with sheep on roots to keep a close eye on crops and check for the level of re-growth.

“If root crops are making more re-growth it will affect the feed value of the root. And re-growth on brassica crops can be poisonous to sheep, so it’s a situation that needs watching carefully.”

High worm burdens and even coccidiosis can be missed at this late stage of the season especially where conditions are wet. But even though hoggets that need a drench face a withdrawal period prior to marketing, it’s far better to dose as soon as a problem is noticed and arrest anything that could check growth and impede the rate of finish.

“If hoggets are healthy and don’t need worming, but root crops are starting to deteriorate, it’s important to get feed troughs out to hoggets quickly. If there are hoggets around at lambing time it’s easy to lose focus for a while. Excess kilos can be a handicap if they take sheep towards 50kg. With prices at their current level, it’s important not to let excess weight risk a lower return.”

“Finishers supplementing roots with cereals should be aiming for a weigh gain of 300g a day – 1.5kg a week – starting off from a daily intake of about 100g and building up to 0.5-0.75kg. It’s important to try and meet these targets and to handle stock regularly,” he says.

ADAS sheep advisor Kate Phillips also stresses the importance of getting hoggets finished as quickly and as efficiently as possible.

An ADAS trial assessing intakes of lambs on roots in wet conditions found 50% of the gut fill of some sheep was soil. “So it’s important to get some cereals into hoggets that may be starting to stand still because they aren’t getting enough feed value in the roots,” advises Mrs Phillips.

Mrs Phillips says dry matter intakes have been an issue with hoggets coping with wet conditions this winter. And with some market forecasters saying hogget prices are unlikely to rise in the coming two months, Ms Phillips says it makes sense to keep them growing and get them away as quickly as possible rather hanging on and assuming prices are going to improve in late spring.

“Even store hoggets that have been on grass and have yet to be put on to cereals for the final push, would benefit from some dry forage at this stage to keep them moving forward and hit that 300g a day of gain.”

Despite the contrasting weather conditions across the UK, there’s widespread agreement that hoggets have been finishing faster this winter – a situation being reflected in many markets where there’s currently an excess of “thicker” sheep earning lower prices and losing potential income for vendors.

And Liz Ford of EBLEX has non-nonsense message for hogget finishers: “get into them now.”

“The market returns show about 50% of hoggets are being sold at weights that are too heavy to earn the best prices. It’s a lost opportunity for finishers who could have sold them lighter at a higher price but they can still sort with their remaining hoggets if they prioritise handling more regularly.”

EBLEX says the market looks “fairly stable” for the next two months although average returns of about £2/kg are unlikely to be exceeded – a situation they say should strengthen the resolve of finishers to look carefully at how hoggets are being fed and how often they are being handled to assess weights and level of finish.

With store hoggets still on offer, EBLEX says finishers looking for sheep mustn’t base the buying-in price on the expectation of a late season price rise.

“Despite the improvement we’ve seen in finished sheep prices, costs are still high. Stores bought in the coming weeks need to be fast-tracked on to a finishing regime that will get the optimum amount of efficient weight gain in the fastest time to hit a weight that will earn the highest market return,” says Ms Ford.