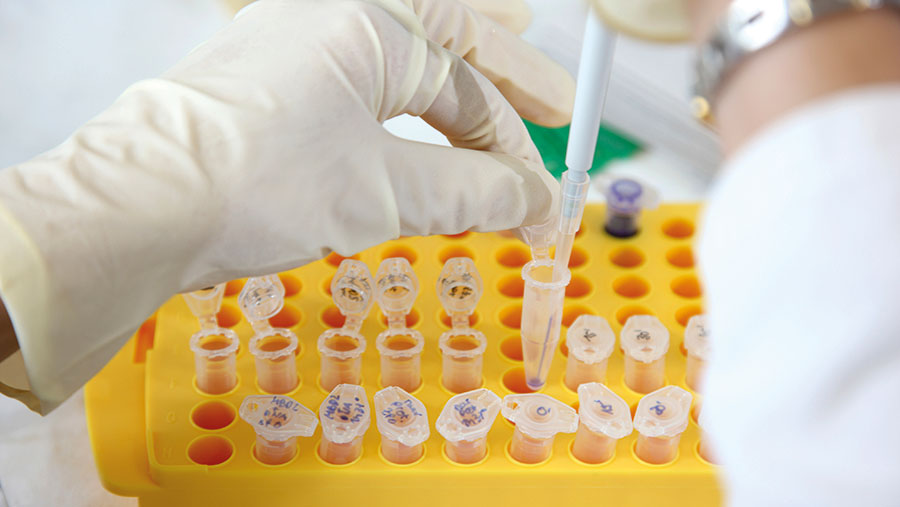 Technology is constantly changing what farmers can find out about their livestock, and speakers at the Dairy Tech event on 7 February told delegates about two new exciting tests that are being developed.

Both of the tests aim to give farmers more information about the health of their animals. A genomic test will determine an animal’s level of resistance to disease, while a penside liver fluke test would give results almost instantly.

Semex Genetics is working with a genomic testing lab to develop a genomic score for immunity, which it hopes to launch later this year.

A full genomic test will be run on a tissue sample from the ear of a calf and then Semex will be able to take the genotype of the animal and, using data from physical tests on their population of bulls and commercial cows, give the calf a genomic score for immunity.

This will indicate the animal’s ability to respond to disease challenges it may encounter throughout life.

See also: Why genomics is a more accurate predictor of performance

“The actual ability to recognise and respond to pathogens is quite heritable,” said Dr Steven Larmer, global dairy solutions co-ordinator at Semex.

He also explained that a dairy cow has around 23,000 genes, 10% of which have some role in the disease response.

The limitation of many of the current diagnostic liver fluke tests available is that samples have to go to a lab for analysis, says Tessa Walsh from Liverpool University, who is working on a penside alternative.

She says that the withdrawal periods of products combined with the risk of anthelmintic resistance increases the need for a rapid diagnostic test.

The antibody-based test they have developed uses lateral flow technology, similar to a pregnancy test. Using a blood sample from an ear prick, it gives a result in five minutes, which would allow targeted treatment and should reduce prophylactic use of triclabendazole.

The product is still in design stages, so a cost has not been confirmed, but Ms Walsh believes it should be cheap to produce.