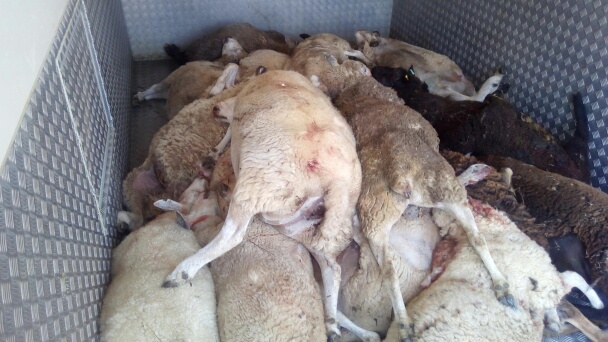 A sheep farmer has appealed to dog owners to act more responsibly in the countryside after 29 of his sheep were killed following a terrifying attack.

Angus Baird said his sheep were “dropping like flies” following the attack in Merstone on the Isle of Wight.

An out of control dog or dogs is believed to be responsible for the incident, which happened some time between 7pm on Tuesday (4 September) and 7am on Wednesday (5 September).

A neighbour raised the alarm after he spotted three sheep lying dead in a field in Merstone on Wednesday morning.

Mr Baird went to the field to check his flock of 330 sheep, mainly Romney Aberdale, and he found 21 dead sheep.

At first he thought the animals may have died from poisoning after drinking water from the reservoir.

But on closer inspection, Mr Baird discovered bite marks and signs of distress on the sheep, which suggested they had been chased for some time.

“One sheep had drowned after being chased in the reservoir, another dead one had a broken leg and bite marks on its other leg after it had been chased and there were 19 other dead sheep scattered around the field,” he said.

Frothed at the mouth

The sheep were checked and moved into the next field. A further eight sheep have since died. They were all found sat down and frothed at the mouth.

The dead stock were taken back to the farmyard in a wagon and a vet was called to carry out a post-mortem examination on two of the sheep.

“There was no sign of any poison or anything unusual in the rumen,” said Mr Baird.

“The sheep looked quite healthy, but when the vet cut in by the heart she found 4-5 litres of fluid and concluded that the sheep had died of a heart attack brought on by the stress of dog worrying.”

Mr Baird said he planned to put the sheep to the ram in about a month’s time He had lost about 10% of his flock and would need to buy replacement ewes.

He estimated that the incident would cost him up to £6,000, including vets bills and disposal costs. However, he hopes his insurance policy will enable him to recover the costs.

“If your dog is chasing sheep around, it may look like it’s having fun, but it’s the implications of what might happen in the ensuing hours. This is pure dog worrying.”

Barry Isaacson from Jervis Court Equine, a fallen stock disposal service operating on the island, was called to collect and dispose of the dead sheep.

He said: “A lot of farmers are turning people off their land if they find them with dogs off their leads. The general feeling among owners is that their loose dogs are playing with the sheep, but they don’t recognise it being a problem.

“This is happening all the time in the countryside. People from towns are buying homes in the countryside, but they are not brought up here and don’t understand the rules and the need to keep dogs on leads at all times around livestock.

“On this occasion, the sheep are not ripped to pieces, but many were exhausted after being chased by a dog or dogs that got tired and went home.”

Mr Baird has reported the incident to Hampshire Constabulary. He has appealed to anyone with information to contact police on 101.