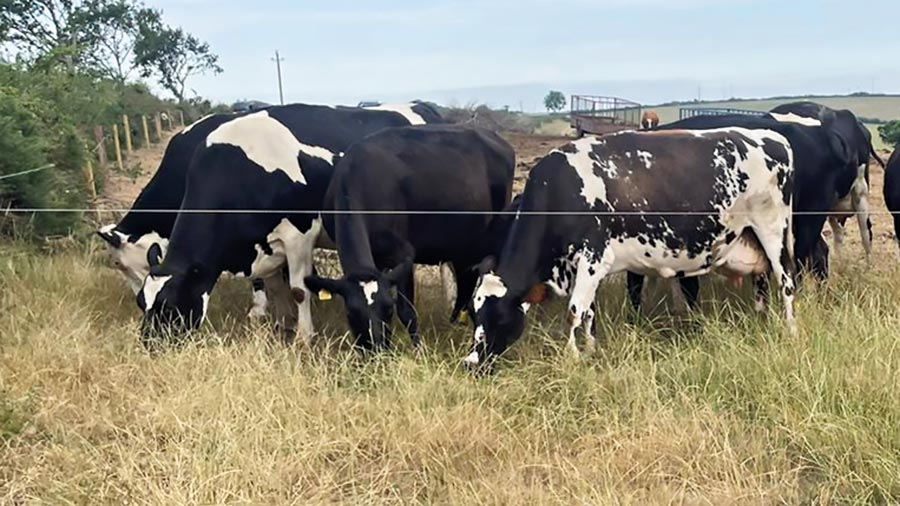 A Devon dairy farm that feeds hay as a standing crop to autumn-calving cows during the dry period has a milk fever incidence of just 1%.

The Cheriton family introduced this high-fibre diet after shifting from all-year-round calving to an autumn block at Aller Barton near Crediton.

Allowing grass covers in some fields to grow to as much as 4,500kg dry matter (DM)/ha provides cows with rumen fill, but little energy.

This, says Rob Cheriton, prevents cows getting over-conditioned and their unborn calves gaining too much size, resulting in easier calvings and fewer metabolic disorders.

This year, 28ha (70 acres) have been set aside as standing hay for grazing by 330 cows and in-calf heifers from early July.

“We start setting up fields in mid-June, around the heading date for grass seed,” says Mr Cheriton, who farms with his parents, Richard and Rosie, and wife, Millie. 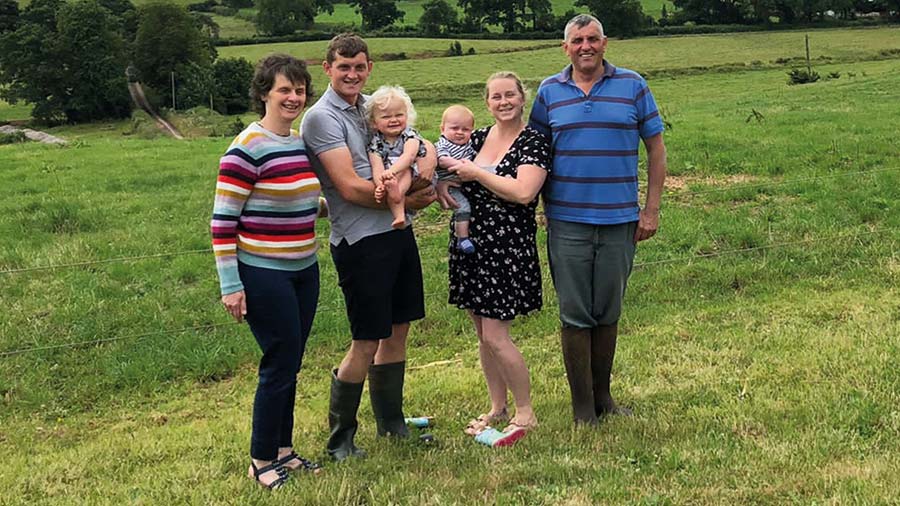 The preference is to use older leys with a more diverse range of grasses than newer hybrid pasture, and to utilise the fields near to the farmyard for the close-up calving group.

The far-off group grazes more remote fields, in a mob of about 200, and returns to the closer fields two to three weeks before calving to graze in a group of 80-100.

“We try to use different fields every year, but we have grown standing hay in some of the further away paddocks for three or four years because it suits our system,” he says.

These paddocks are 2.5km away from the farmyard and accessible by farm tracks.

These are grazed by heifer calves in the spring, a cut of silage is taken and then the heifers are grazed on the aftermaths. Some are set up for standing hay as early as mid-May.

Fertiliser is applied in May at a rate of 30kg nitrogen/ha. It can potentially add unwanted quality, but Mr Cheriton says without it there would not be sufficient bulk at the bottom of the stems.

Fields earmarked for reseeding are a good match for this system, he says, due in part to weed ingress.

When the grass is left to go to seed, the weeds follow suit, which can cause a problem if there is already a weed burden of docks or thistles, for example.

Targeting the fields to be reseeded overcomes this.

When they are turned on to the standing hay, covers are at 3,500-4,500kg DM/ha. “Anywhere from knee to thigh height – long, stalky stuff”, says Mr Cheriton.

Grazing is behind a fence, with the size of the break dictated by the number of animals in the group. This will vary at different times of the dry period, but they generally get fresh grazing every day.

A back fence is also used to prevent the trampling of new growth and poaching and helps the fields to recover well.

Even when fields are not reseeded, he would expect them to grow 10-12t DM the following year, accepting a loss of “a couple of tonnes of DM’’ over the whole year.

“We would aim to get at least one, if not two, grazings from the fields with the milkers and bulling heifers when the cows have eaten the standing hay, to clear it up for the winter,” he says.

It can take 24 hours for cows to adjust to the standing hay when they are first turned onto it.

“On the first day their reaction is ‘what are you feeding us?’ because it is not the good-quality grass they have been used to.

“They turn their noses up a bit, but within 24 hours they remember what it is all about,” he says.

“When we move the fence for the next break their heads are down and grazing straight away.”

Fields are grazed to a residual of 1,200kg DM/ha, compared with 1,400kg DM/ha across the milking platform.

“The aim is to bottom it out so there is no thatch at the bottom when we turn the milkers on to it,” says Mr Cheriton. 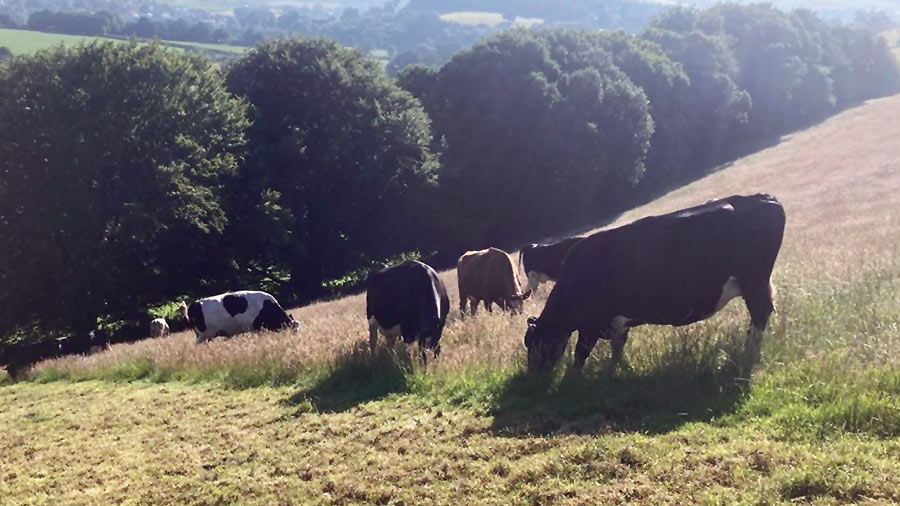 Most years cows get standing hay only – 12kg DM/day – but dry conditions this year have challenged grazing, so their diet is being supplemented with baled haylage sourced from a neighbouring farmer.

“He [the neighbour] doesn’t apply muck or fertiliser to the crop and lets it go to head; it is like buying in more acres of standing hay,” he says.

The ration is 4-6kg of standing hay and 6-8kg of haylage, with the bales fed from mobile feeders.

These are replenished every three days and can be moved around with a telehandler, so that infection does not build up around the feeders.

Lick blocks are sometimes provided. “It stops the cows from getting bored and I think the extra salt helps with cleansing at calving time,’’ says Mr Cheriton.

Cows are given a bolus containing selenium, cobalt, iodine and copper at drying off.

The herd had previously experienced issues with milk fever but there were just two cases in 2021 – equivalent to 1% of the herd.

“Standing hay would play a part in that because most of the goodness has gone from the plant the cows are grazing.

But we also have fewer issues because we are now running a 7,500-litre cow rather, than the 9,000-litre Holsteins we were previously,” he says.

A dry summer is the ideal environment for growing standing hay – but in a wet year the result is more likely to be a crop of standing silage.

Piers Badnell, Pasture to Profit consultant at LIC Europe, warns that this will put cows at risk of clinical and sub-clinical milk fever.

“This year could be a really good year for standing hay but in a wet summer it can be tricky – it is an inexact science,” he says.

In a wetter year, if the grass is more like standing silage and the grass is not dry and stemmy, Mr Badnell recommends baling and feeding it to other stock classes while sourcing alternative hay or straw as a feed source for the dry cows.

Farms often grow standing hay in fields next to the farmyard because it is convenient for calving.

But these are more likely to have high levels of soil potassium because they will have been frequently stocked.

Those high potassium levels will feed through to the forage and result in milk fever.

Mr Badnell recommends testing the forage and discussing the levels with the farm vet.

“It might mean slightly higher levels of magnesium chloride need to be provided and supplementary feeding of straw,” he says.

Back fencing should be used to prevent the cows from grazing regrowth.

“Those fresh new shoots are a precursor to milk fever,” Mr Badnell points out.