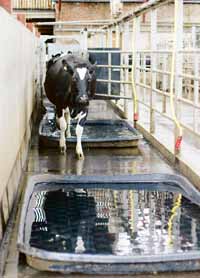 Routinely footbathing the milking herd is widely recognised as one of the primary tools for preventing lameness, so why should dry cows be treated any differently?

Just because dry cows aren’t being milked doesn’t mean they are under any less threat when it comes to lameness, says Gloucestershire farmer Tim Juckes, Tredinton House, Tewkesbury.

In fact, vet Roger Blowey, the Wood Vet Group, explains that transition cows are even more susceptible to foot problems, meaning that maintaining foot health in the dry period is crucial to prevent issues in the fresh-calved cow.

“A study looking at 900 cows on five farms found digital dermatitis (DD) progressively increased over the first four months in-milk, with both DD and foul in the foot declining after this period,” he says.

“Immune suppression around calving can often result in an upsurge in DD and foul. As a result, footbathing, particularly in the transition period, is essential to lower DD levels before calving and prevent this increase.”

And to combat lameness and train heifers before calving into the herd, all dry cows at Tredinton House are footbathed on a daily basis, explains Mr Juckes.

“Dry cows have to be moved out of the cubicles every day to allow the shed to be scraped, so it makes sense to run them through the parlour and footbath at the same time.” Replacement heifers also join the dry cows four months before calving to allow them to settle and train them through the system.

The main milking herd is footbathed twice a day, every day through a formalin footbath, a strategy which has resulted in marked improvements in foot health in the herd of 490 Holstein Friesians. Wide passages and low stocking rates also means cows are not overly dirty when they go through the footbath.

“Before footbathing, we were experiencing a high incidence of foul in the foot, which meant we were using a lot of antibiotics. Now we only get a tiny amount of digital dermatitis and foul is almost a thing of the past, with only about four cases a year.

Mr Juckes says footbathing every day is the main reason it works, with routine maintained all the way through the system. “Stock continue to be footbathed daily, even after they have been moved into the calving yard two weeks before calving.

“In the past we were seeing some cases of foul in the foot at this stage – now we drive these cows through the bath. It may create an extra job, but it is definitely worthwhile.”

And according to Mr Blowey, the two weeks before calving is the time when cows are most susceptible to infection, so as a minimum all dairy farmers should be footbathing during this period.

“Transition cows and heifers should also be provided with a clean concrete standing area – this acts to thicken the soles, harden their feet and get them used to standing on concrete,” he says.

“The transition cow ‘utopia’ should involve running animals through the parlour three times a week, barrier dipping all teats and walking them through a footbath.

“Bathing all the way through the dry period is ideal, but when this is not attractive, concentrating on the two weeks prior to calving is a must.”

“When footbathing once a week, farmers often experience problems with cow flow, but as soon as they up the rate to every day, cows become more used to the system and it works like clockwork.”

You wouldn’t teat dip once a week, so why would you footbath once a week? asks Mr Blowey.

“Digital dermatitis is mastitis of the foot and should be treated as such. As with mastitis and teat hygiene, disinfection is more effective when the disease-causing bug has recently landed on clean skin – the key is to use footbathing as routine to prevent the problem, rather than use it as treatment.”