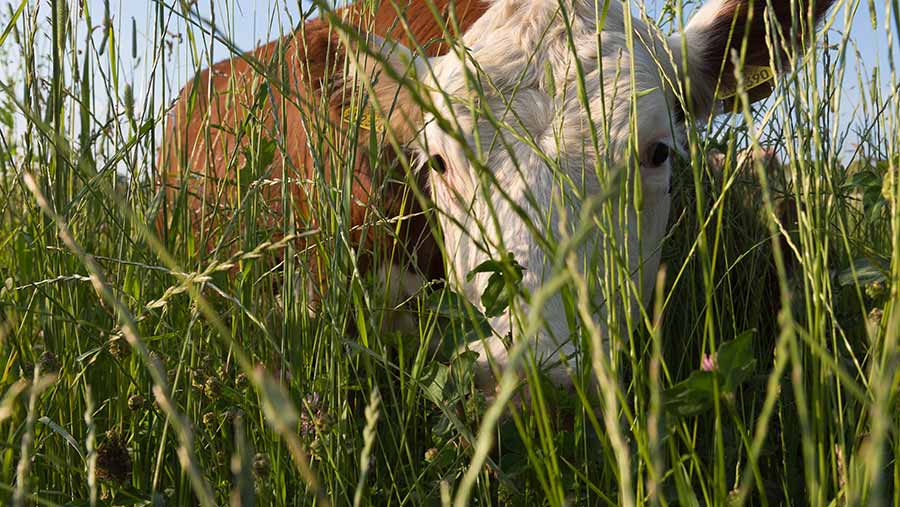 Multispecies herbal mixes are becoming increasingly popular among livestock farmers as a means of driving production and environmental gains (see “The numbers”).

The benefits of these leys range from improved soil structure and drought resilience to greater biodiversity.

Most mixes include perennial ryegrass (PRG), herbs such as plantain and chicory, and legumes including red and white clover.

However, there is no set definition of a multispecies herbal ley, nor rules on what and how many species it should contain.

This makes designing a standard guide to management challenging.

At the very least, though, adopting a different grazing mindset is essential if the full potential of leys that include a herbal component is to be realised.

The first grazing should be taken when the new ley has passed the “pull test” and there are six leaves on the plantain and seven leaves on the chicory, says Dr McEvoy.

“This helps in terms of building up the root of the plant,” she says.

“By not removing the leaf too early it has a chance to put some energy down into the root, and helps strengthen the root. This should help with the persistency of the plant.”

2. Rotational grazing is a must

Rotational grazing is essential to maximise regrowth and persistency. Such a system encourages the chicory and herbs to build enough leaf and put energy down into the roots.

By contrast, set-stocking increases the risk of preferential grazing of certain more palatable species, such as clovers.

Grass plate meters are not calibrated for mixed leys and tend to be inaccurate at assessing covers. This is because plant density varies across the sward.

Visual assessment will be needed, which will improve with practice.

3. Go in at higher covers

Prof Boland says “you can get away with” going into much higher pre-grazing herbage mass with multispecies mixes than with PRG and white clover leys.

4. Think about the residual

To avoid grazing out certain species, herbal mixes should not be grazed too tight.

Prof Boland says: “What we do know is consistently grazing to 4cm does not favour persistency of herbs or red clover in the sward.”

In beef grazing trials at University College Dublin, residuals of 6cm have been targeted to strike a balance between the quality of PRG and the persistency of herbs and legumes.

To encourage persistency, she also advises against grazing herbs in challenging conditions, as they do not respond well to poaching.

In addition, chicory has a tendency to bolt, which means mowing may be necessary to return it to a vegetative state.

Prof Boland suggests extending the rest period between grazings by between seven and 10 days compared with a conventional PRG and white clover ley, to help recovery.

The exact period will need to be adapted according to the time of year and grass growth.

Mr Jones believes mob-grazing, with a long rest period between grazings, is the best way to realise the full potential of herbal swards.

By resting for 28-60 days between grazings, depending on the time of year, the herbs have a chance to put down good root depth. This helps with drought tolerance, he says.

This enables plant material to be incorporated into the soil and root depth to be maximised.

At peak growth, cattle can be stocked at 100 animals/ha.

Mr Jones recognises that this is most relevant to lower-yielding herds of 5,000-6,000 litres of milk, where it is possible to sacrifice grass quality.

However, in this case, he says farmers will have to accept that the full potential of the sward is not being met.

Bloat can be a risk when grazing mixed swards with legumes. Mr Jones advises providing free-access rock salt and oil in the water, if necessary.

Herbal mixes tend to be slower to get going in the spring, which is when tactical application of nitrogen is appropriate, according to Dr McEvoy.

However, this will compromise the legume proportion in the mix, she says. As such, she advises applying N for the first two grazing rounds and then cutting it out from April onwards. 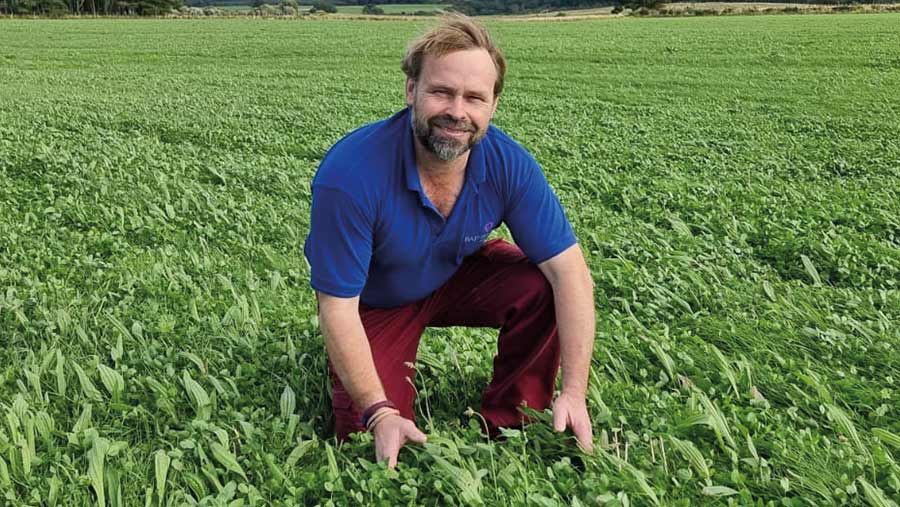 At Donkin Rigg, multispecies mixes are used as a break between red clover leys and to increase forage drought tolerance.

Perennial ryegrass, white clover, timothy and plantain are undersown into barley and vetch, which is cut as a wholecrop in the first year.

The multispecies mix is then rotationally grazed with lambs post-weaning. Ewes also go onto the leys around the start of April in the run-up to lambing.

Mr Bainbridge says rotational grazing with a 20- to 30-day rest between grazings is a must to ensure the leys last for five to six seasons.

In his experience, set-stocking means all of the “nice things” in the mix disappear as they are not resilient enough.

“When we’ve grazed something too much it doesn’t recover the same and you lose all of your sown species,” he explains.

He also believes leaving the mixes for a 90-day rest period between January and March helps with resilience.

“If you set-stock and graze for 12 months of the year, you’ll lose the best things in the ley. They need that rest period to rejuvenate and put their roots down.”