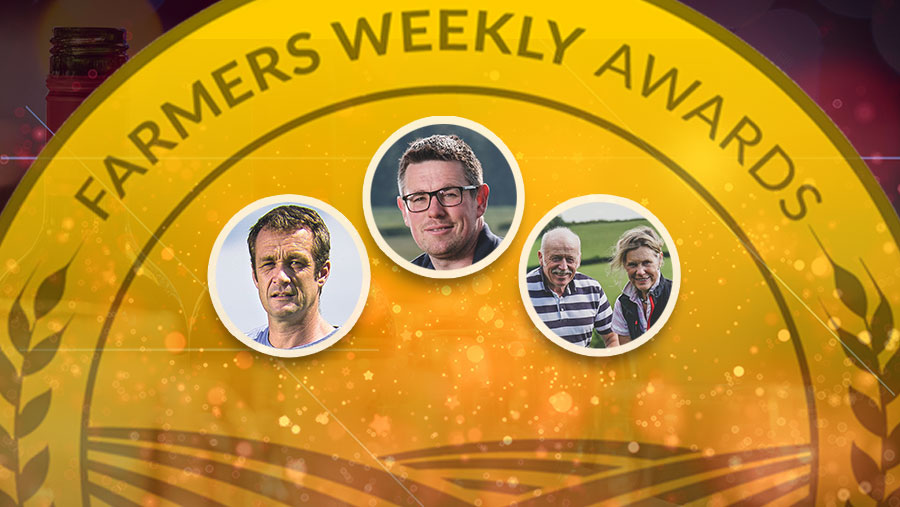 This year’s finalists may be far flung, but they have in common a passion for grass and expertise in managing it to produce profitable livestock enterprises. 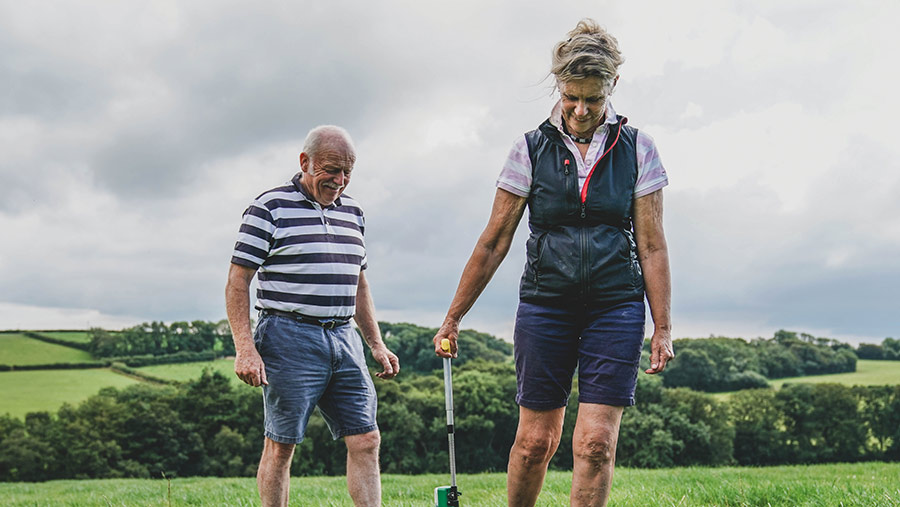 Together they are changing the way they farm, reducing their reliance on inorganic nitrogen fertiliser to produce sustainable beef and lamb from grass.

The cold, heavy, yellow clays of the Culme Measures in the Tamar valley, combined with the west wind, make for tough conditions at Trepoyle Farm.

Livestock can’t be outwintered, and the grazing season doesn’t extend beyond April or October.

With no additional labour on the farm, they have reduced suckler cow numbers from 200 to 120 to create a more manageable system and are instead buying in dairy-cross bucket-reared calves, which they rear alongside a pedigree flock of 200 Lleyn ewes.

They had already reseeded most of the grassland with long-term clover-based grass mixes. Now, under CS, they have arable reversion, low-input grassland, and permanent pasture alongside the River Tamar, managed under the scheme’s lenient grazing option, with no fertiliser.

Currently, where fertiliser can be used, a starter dressing of 75kg N/ha is applied in the spring, followed by a dressing of dung through the grazing season.

Most grass is measured weekly and annual production averages 12t dry matter/ha. Stocking rates are 3 a hectare for suckler cows, 7.5 for cross-bred calves and 12.5 for sheep.

Grassland machinery is kept simple: a topper for even growth after grazing by cattle, harrows to pull out dead grass and reseed in cereals, and a sward lifter to aerate the soil – which Suzanne says is “a fantastic piece of kit”. Silage baling and wrapping equipment is shared with a neighbour.

Soils are tested regularly and lime sand, used under bedding straw and in sand-based cubicles for the suckler cows, is spread twice a year.

New to the farm this year is using the Bokashi fermenting process for farmyard manure. The plan is to use it as a fertiliser in July and August for autumn grass.

Improvements in grassland management have raised output/ha to 1,000kg liveweight gain (lwg) a head from the suckler cows.

This translates to £2,500/ha of meat, says Bill, which he equates to 8,000 litres of milk/ha. A move to two-year calving has also raised efficiency.

Output from the dairy-cross Angus calves stands at 1,250kg lwg/ha, while lamb output is 757kg lwg/ha.

Antibiotics usage is well below national targets, at 4mg/pcu for cattle and 3.5mg/pcu for sheep.

Bill and Suzanne are preparing to go into partnership with a younger farmer to bring more labour and technical know-how to the farm.

This will also give Bill more time for politics and campaigning for “correct carbon balancing”, which takes account of the short life cycle of methane emissions from ruminant livestock.

The farm’s first herbal ley, grown with no fertiliser, was cut in early June, and more are planned – they are the future, says Bill.

A new TB quarantine unit on the farm has just been completed, and a productivity grant is being sought to roll out electronic identification (EID) for the cattle, as it has proved very useful for measuring performance in the sheep flock.

“Bill and Suzanne are forging a grazing system to get the best from a range of grassland types, while keeping a strong focus on the environment.” 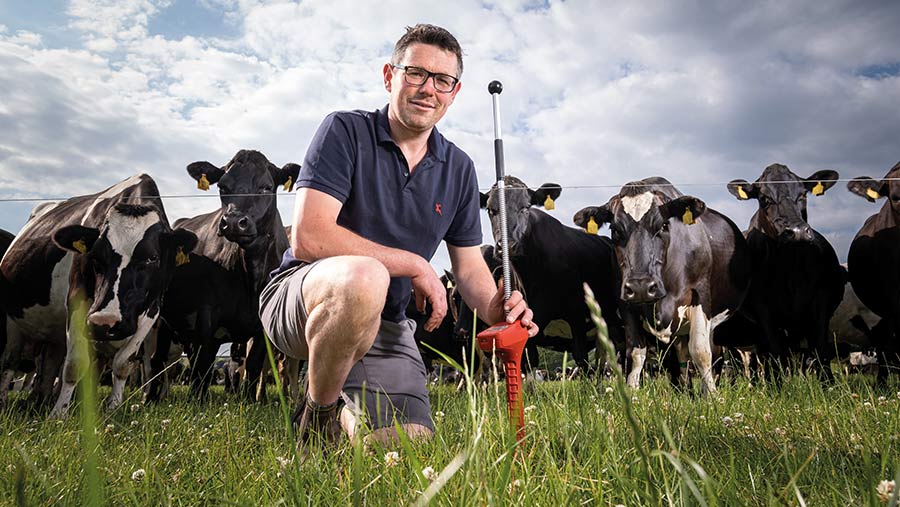 Until three years ago, Peepy Farm, a 256ha holding on the Allendale Estate near Hexham, was down to arable cropping, with no grass and barely an animal in sight.

Once home to the renowned Hunday herd, the farm is back in dairy production.

Extending the grazing season and growing as much grass as possible is farm manager Mark Housby’s aim. He heads a team of four running the 460-cow herd for the farm’s tenants, Robert and Jackie Craig.

Mark brings a wealth of experience to the role, having previously set up another dairy unit with Robert.

Most of the milking platform was sown to grass after harvest in 2018 using high-sugar ryegrass mixes.

The whole farm was soil-sampled the following February and lime spread where pH was low. Target pH across the farm is 6.5.

During the main grazing season target covers are 3,000-plus kg DM/ha, and residuals, 1,650kg DM/ha. Autumn-calving cows calve on standing hay at around 4,000kg DM/ha.

Paddocks have different entry and exit points for the cows to limit poaching, and back-fencing reduces damage and protects grass regrowth in spring.

Weekly plate meter readings are used to monitor growth and guide use during dry spells, when grass tends to burn. No silage is made until there is a surplus on the platform.

Most is clamped, but later in the season round bales are made using any small surpluses to help manage grazing quality.

As part of national grass monitoring project GrassCheckGB, the farm has a new weather station to monitor rainfall and soil moisture.

It’s proving a valuable tool, backing up trends shown by the plate meter, but earlier.

To reduce inorganic fertiliser use, application rates have been cut this year. Instead of putting on fertiliser in early and late March, they follow the cows with 25kg N/ha after each grazing, provided there is enough moisture.

Milk is supplied to FirstMilk, and the farm is among 85% of its members to have signed up so far to the co-operative’s First4Milk pledge.

Mark benchmarks production and shares ideas with three discussion groups, two of which he helped to set up.

He also uses the First4Milk app to track current performance with the previous year’s herd data and the creamery’s average.

Maintaining a good work-life balance and keeping staff happy are priorities. For example, outside calving periods, each member of the team works only one weekend a month and has a weekly late start.

Sward mixes are a topic of constant debate on the farm, and this year plantain has been oversown in some paddocks.

Results are promising and have given Mark confidence to begin introducing diverse mixes more widely to help improve soil organic matter and make the farm more resilient to drought.

Composting farmyard manure to create a soil conditioner is also helping this process, and more slurry storage is planned to give more flexibility to spreading times.

In recognition of Mark’s role as farm manager, a profit-share agreement is being drawn up with the farm tenants.

“Mark has used a simple and successful template to set up and run a very efficient farm. He is proactive, always looking at ways of taking the business forward and building resilience”

Richard Rogers, who farms on Anglesey in partnership with his mother, Margaret, has overseen a transformation of grassland performance in the past 10 years.

He switched to a rotational grazing system and bought Friesian steer calves from spring-calving dairy farms to produce beef on low inputs.

Armed with the experience and confidence to manage grass effectively, he then converted one of the partnership’s three farms to a grass-based dairy unit.

Grass production from the three farms averaged 14.35t/ha in 2020, and utilisation of grass sits at around 85%.

The cross-bred cows weigh an average of 509kg, and more than two-thirds of their annual average yield of 5,349 litres comes from forage.

Grass is monitored and measured weekly. The aim is to graze the cows from mid-February to mid-November, at a stocking rate on the grazing platform of 4 livestock units(lu)/ha, with a target of 10-11 grazing rotations a season.

Soil is sampled every two to three years, and lime applied as needed to achieve a target pH of 6.3.

The nitrogen budget for the grazing season is 250kg/ha. This is applied every three weeks to ensure minimal leaching and maximum uptake.

Reseeding, usually using a home-blended mix of high-sugar varieties with similar heading dates, is targeted at the least productive 10-15% of leys each year.

Taking on three farms and investing in the necessary infrastructure has involved a lot of debt, says Richard, but it has served to drive innovation and change.

“Profitability is the focus of the business,” he says. “There’s no point in growing grass expertly if you’re not utilising it. The driver is turning grass into cash.”

Richard has gone out of his way to create opportunities for young people to get started in farming and develop skills and experience. “I like people, and working with people,” he says.

The commitment has paid off: he has a great team of staff. Stand out among them is Gethin Roberts, who, since joining the business from college 15 years ago, has become Richard’s “right-hand man”. He is now a partner in two of the units.

The partnership is responsible for forage production and heifer rearing for the three farms and is also contracted by them to carry out any tractor work such as fertiliser spreading, mowing and baling.

As well as healthy competition between the three units, performance is benchmarked through two discussion groups.

Lameness, at 2.5% across the three farms, is low. Longevity is also impressive, with more than 30% of cows at Tre Ifan in their seventh lactation.

The business is not standing still – a fourth dairy unit has been set up this year on the nearby Llyn Peninsula. The aim across the farms is to capture more milk from forage.

This year 32ha (79 acres) of wholecrop has been grown to produce milking cow silage. Low in protein and high in starch, the aim is for this to replace some concentrate feed in spring.

Richard and Gethin are considering joining a group of farmers trialling a carbon project with Yew Tree Dairy. It could lead to a premium for their milk. 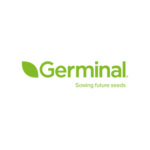 “As grass and forage seed specialists, Germinal continues to support those focused on and achieving excellent grassland management. Congratulations to each of the finalists on their diligent measurement, management and impressive success within their systems.”