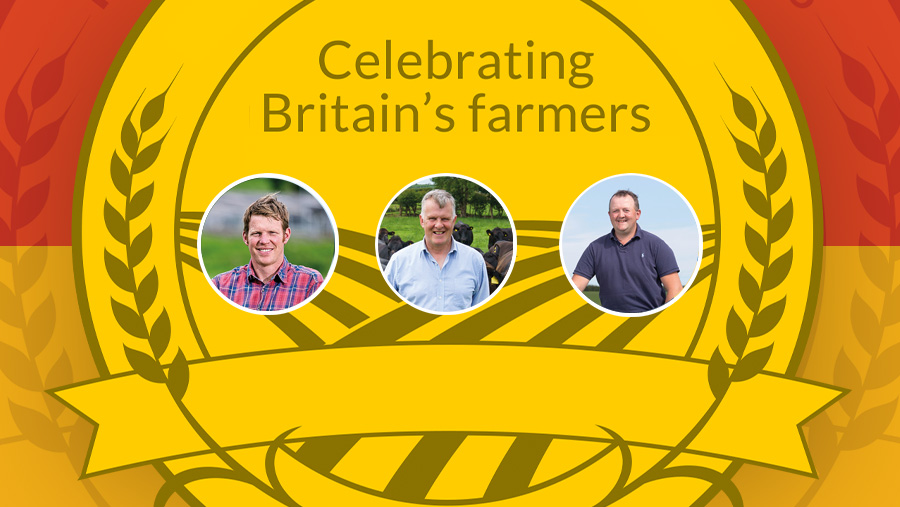 Excellent grass growth and use is a common theme across all three finalists, who are each running very profitable businesses by making the most from grass and quality forage.

The 2020 Grassland Manager of the Year finalists: 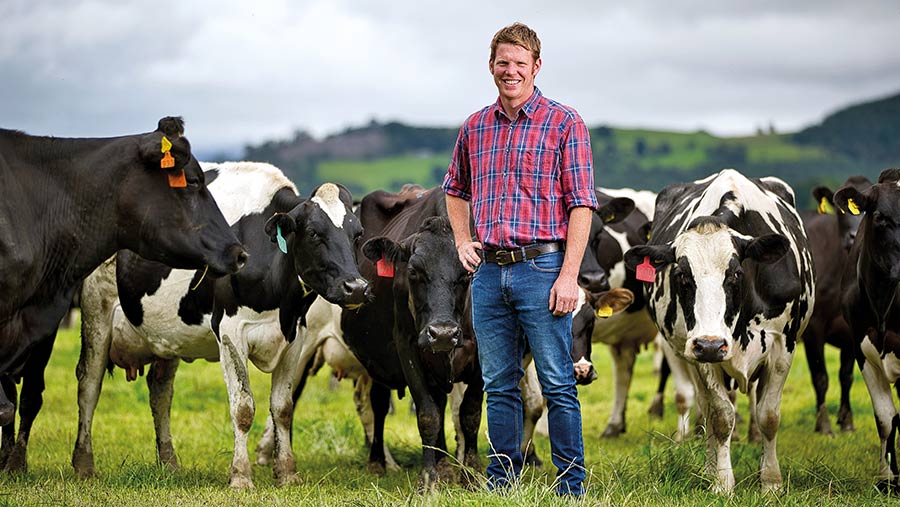 Sam Carey travelled to the US and New Zealand to work on farms, but it wasn’t until he arrived back in Wales that he came across share farming and spring calving.

“In New Zealand I worked on beef and sheep farms,” explains the Harper Adams graduate, who was brought up on a 500-cow dairy farm in west Wales.

Sam admits he was unsure which path his farming career would take until he met Nuffield scholar and share milker Rhys Williams, describing it as a “light bulb moment”.

“Everything about share farming was for me. I didn’t have the shackles of home and realised anything was possible. I took a job with Rhys for two years and then met Richard Price through a mutual friend.”

Sam has been pivotal in making the conversion of the former beef and sheep unit a success since joining Richard as a share milker six years ago. “I met Richard in January and we pushed the button in March, and we were milking by the following January.”

Grassland management
The successful transition to dairy farming required significant investment in infrastructure. The whole farm was soil sampled, with 80% reseeded in the first year and 2,000t of lime spread.

It’s been a steep learning curve too, admits Sam, who says the farm’s high altitude and the fact cows walk up to 4km on uncompromising terrain can be challenging. Sam pushed stocking rates to four cows/ha (1.6 cows an acre) to see if grass growth could keep up. However, he ended up feeding 1.9t a cow in 2018 due to the drought because they had to buy concentrates to make up for a grass shortage.

“When you’re taking on a farm, you don’t know what you’re going to do until you do it. I set out to test the place to the maximum and I found what I thought it was and pulled back.”

Changes
In response to concentrate use climbing, Sam made some changes. Calving date was moved back two weeks until 20 February to better match grass growth, and stocking rates were reduced from 520 to 480 (3.5 cows/ha or 1.42/acre) to alleviate pressure on the grazing platform.

This reduced supplementation to 0.8t a cow in 2019, with production holding strong at 411kg of milk solids a cow and profitability improving by nearly 3p/litre.

Now in its sixth season of production, the business is targeting 448kg of milk solids a cow while cutting concentrates to 750kg. Key to achieving this is growing and using more grass, which Sam believes they can do by improving soil biology.

The farm is constantly evolving, and Sam is currently experimenting with growing herbal leys on their 33ha (81.5 acres) youngstock platform to improve root structures and lift soil fertility. To date it has only received 50kg of nitrogen/ha and has grown 12t of DM/ha (4.86t of DM/acre).

Future
Sam is keen to explore more sustainable methods of farming, and this year they have halved nitrogen inputs without compromising growth on the grazing platform by applying liquid fertiliser. This is having the added benefit of improving grass use and reducing the risk of contamination, he adds.

On the youngstock platform they are trialling mob-grazing 240 heifers in the hope of sequestering carbon and improving soil fertility.

Sam says he’s ready to take on a second unit. “I would like to be able to farm in a sustainable way and offer opportunities to people that work for me.”

Sam epitomises everything that is brilliant about share-farming agreements. Bright, open-minded and tenacious, he has a fantastic future ahead of him and is heading up a very profitable and successful business.”

The judges liked
• Open-minded, willing to try new approaches
• Strong focus on soil fertility
• Infectious enthusiasm
• Very driven
• Leads a young team and not afraid to give them responsibility to develop their confidence 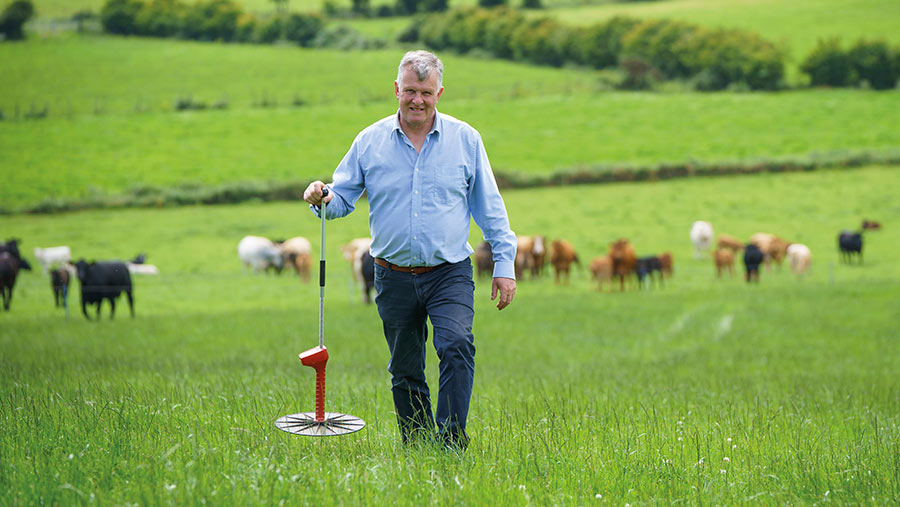 Sam Chesney is two times more profitable than the average beef farmer in Northern Ireland. Much of this success can be attributed to the fact he grows nearly three times more grass.

Sam is surrounded by land-hungry dairy farmers and can’t afford to compete with astronomical rents, so his approach is to get the most from the land he has. He was encouraged to adopt a paddock grazing system after a visit to the Republic of Ireland and is now making use of every blade of grass grown on the farm.

Grassland management
The system has been honed since 2010 and a notable 13.23t/ha (5.36t/acre) was grown last year. However, what is more impressive is the amount used – 92%. This is no mean feat given the farm receives 1,016mm of rain annually.

Sam has moved to earlier lambing in January to meet the demands of his Tesco contract. This suits his climate and allows him to make the most of peak growth in the spring.

High-index Charollais and Meatlinc rams are chosen for growth to aid early finishing, with all lambs sold by June.

Suckler cows calve over 10 weeks starting on 10 March, and the farm uses Black Limousin and Charolais bulls within the top 1% for growth and ease of calving.

Sam is also improving grass use by planting hedges to provide stock with shelter against the prevailing east coast winds from the Irish sea and skipping exposed paddocks.

Forage management
He has extended the grazing season by planting rape cross kale and stubble turnips in sheltered paddocks.

Data drives every decision he makes. “We carefully look at utilisation and follow up with soil sampling, which will form the basis of our reseeding plan.”

He is reducing bought-in concentrates by growing 2.4ha (60 acres) of red clover to feed to bulls, with just a finishing blend purchased to make up their total mixed ration.

The whole farm is GPS mapped and nutrients are applied in accordance to soil tests. Farmyard manure is applied to the grazing platform and slurry is spread on the silage ground using low-pressure tyres and a trailing shoe to limit compaction.

Future
Last year he began finishing 50 Angus-cross calves on contract for Blade. Calves arrive at 12 weeks, weaned. Heifers are currently averaging 1kg/day on a herbal ley being trialled this year.

“The Blade calves were introduced to improve our cashflow and make the most of early spring grass.”

For Sam, forging good relationships with his buyers is fundamental to good business performance.

“We are trying to have money coming in every month. I think the way forward is for farmers to get themselves aligned. I know exactly what they will be paying for lambs next February.”

They are already producing 1,600kg of liveweight/ha (647.8kg/acre), but Sam’s ambition is to increase this further and lift sheep numbers by 50 to capitalise on the farm’s good early growing conditions while farming in a sustainable manner.

Sam knows his business inside out and has his finger on the pulse of all his costings. This, alongside impressive grass use, is delivering strong profits.” 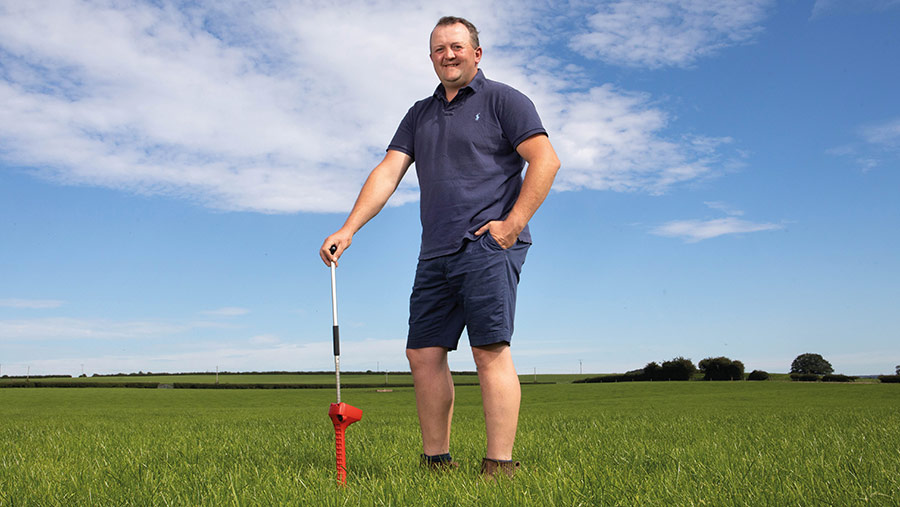 James Muir is running a resilient and highly profitable dairy enterprise by maximising milk from forage and selecting good genetics.

James gave up his career in fraud investigation nine years ago and now share farms with his wife, Lucy, and her parents, Steve and Lesley Brandon. However, he is no stranger to farming, having been brought up on a dairy farm in Oxfordshire.

They milk 420 cross-bred cows, with milk sold to Arla on a manufacturing contract.

Grassland management
Maximising milk from forage is the name of the game. Total production of their spring-calving herd is 6,350 litres a cow, and more than 70% – 4,632 litres – comes from forage.

Cows calve over a 12-week period starting in February, with 78% calved in the first six weeks. Cows are bred to dairy using AI for the first three-and-a-half weeks of the breeding season and then get served to Hereford.

They aim is to start grazing in February, but James admits grazing can be a challenge from season to season.

“We had a 1.5t/ha [0.6t/acre] grass growth deficit from January to April this year compared with the last due to the bad start to the year and the drought, when we grew nothing for five weeks.

“You can’t guarantee every season is going to be like another. You have to work out averages over five to 10 years.”

This is one of the reasons they target a “realistic” stocking rate of two-and-a-half cows a hectare (one an acre) so they can eke out any deficits before starting up the tractor to feed silage, because this compromises grass use, says James.

Cows are given 12-hour breaks to fresh pasture after each milking. The grazing platform mainly comprises high-sugar ryegrasses.

They aim to take three to four cuts of silage a year. Rather than having a separate silage platform James operates a multicut system, constantly taking surplus from the grazing ground.He says communication is key to ensuring contractors come at the right time. Paying any bills within seven days also helps massively, he adds.

They target a 100-day winter housing period, with cows housed in cubicles and fed quality silage. “Our system always makes the best silage. The problem is making lower-quality silage for the dry cows,” admits James.

To overcome this, they add 40% chopped straw into the dry cow diet in January. This is having great success, with milk fever cases dropping from about 55 to just 15 last year.

“The cows are the driver of the business, so cow health is very important.”

Future
With HS2 poised to landlock some of the farm, the couple have just secured 104ha (257 acres) on a 25-year farm business tenancy and hope to be milking 200 cows at the new unit, just five miles away, by October.

The second dairy will be autumn block to complement their spring enterprise, with milk sold to Arla.

“A while ago, I thought 1,000 cows was the goal, but my goal is to have a sustainable business to set my children up to go off and do whatever they want to do,” says James.

James is achieving impressive milk production and cow efficiency by maximising forage use.” 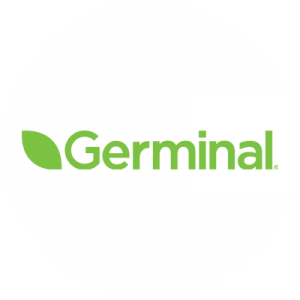 Germinal is delighted once again to support those striving for and achieving excellence in grassland management. As grass and seed specialists, we congratulate the finalists on their impressive success with grass use within their individual farm systems.

Entries are open for the 2022 Beef Farmer of the Year. Does someone you know deserve recognition for their hard work? Give them the chance to shine at one of the best nights out in the farming calendar and help to boost their career.
Enter or nominate now
See more
Share this