This summer’s floods will cost farming hundreds of millions of pounds, with little recompense from insurance or government.

The NFU says the impact of the wet weather, which has left large swathes of farmland in the midlands and south Wales under feet of water, will extend well into 2008. “Apart from the extensive damage to crops, livestock farmers are also facing a loss of forage quality and will have to rely on bought-in feed,” said NFU communications director, Anthony Gibson.

He said it was too soon to estimate the total cost to farmers, but it would certainly run into “hundreds of millions of pounds”.

Some of the losses, such as damage to buildings and machinery, will be covered by insurancepolicies, said Robert Brooks of the NFU Mutual in Gloucestershire. “But crop and stock losses, and clearing-up costs will have to be met by the farmer.” 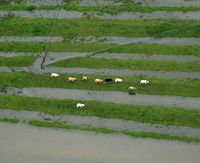 Outlining the problems that many of his clients were facing, Mr Brooks said the lack of fresh water was the biggest issue. Together with Severn Trent Water, the NFU had been arranging for mobile water tankers to go to points around the county, providing supplies for farmers to water their livestock and wash down their milking equipment.

Allowing animals to drink flood water was not an option, given the levels of silt, fuel, sewerage and other pollutants that had got into it, he added.

Mr Gibson said the NFU was talking to the government about aid. “It’s early days yet – there is still another two months to go before the end of harvest. But realistically, we’re not expecting huge amounts of public money,” he said. “The weather is an occupational hazard and farmers are used to taking the rough with the smooth.”

With thousands of homes flooded, the NFU was anxious not to be seen to be asking for handouts, he added. 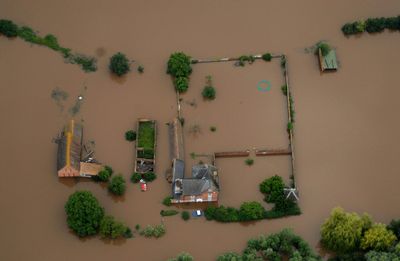 Country Land and Business Association president David Fursden said government must look at its priorities between flood protection and environmental enhancement. “Where we are prevented from cleaning out ditches and rivers in case we disturb nesting birds, then we are clearly prejudicing our ability to manage summer flooding,” he said.