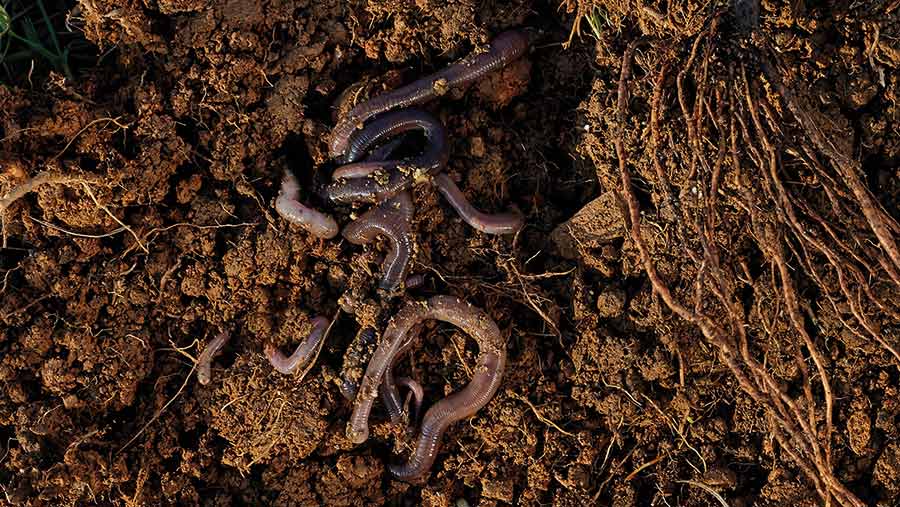 Many farms are closer to being “regenerative” than they might think, says a leading soil scientist.

He said it is about developing a thought process that acknowledges and limits damage (see “How conventional farming can damage the soil food web”) done to soil biology.

The focus should then be on limiting inputs and getting soil biology going again (see “How good farming practice can help”).

“Humic and fulvic acids can be applied to the land to buffer the damage of weedkillers, and compost extracts and biochars [high-carbon residues produced by pyrolysis] can get soil biology moving again, too,” said Mr Bell.

What is the soil food web?

Once the soil food web is in place and balanced, the claim is that this helps the soil to be structured optimally, suppressing weeds and inhibiting disease.

Organic farmers growing 9t dry matter/ha with no chemical inputs is testament to the productivity of soil food webs, the conference heard.

Every living thing has its place providing it is in balance, said Mr Bell. “Only 3-4% of bacteria are disease-causing. The rest are essential to us and essential to plants and soil health.”

In productive grass and arable land, the bacteria and fungi are in balance, whereas bare soil after an earthquake is dominated by bacteria, and woodland soil, by fungi.

The soil food web is made up of a complex range of organisms:

How conventional farming can damage the soil food web

How good farming practice can help

Rotational grazing allows grassland rest periods of 21 days on average. During this time it can regenerate leaf mass for stock to eat and grow root mass, capturing more sunlight and carbon to feed the soil biology

Various slurry additives are applied by some farmers to aerobically digest slurry in the store, claiming it converts ammonia into bacterial protein

More farms are trialling composting to increase bacterial, and particularly fungal, populations in soils. This is added to the land as extracts, teas or whole

Many ways to minimise and address compaction are widely used by farmers, including wider/double tyres, subsoiling and aeration