The processor finishes 700 dairy-bred beef calves annually at its state-of-the-art beef finishing facility, Brongain Farm in Llanfechain, which has always been semi-extensive, set stocking cattle at grass during the summer months.

But to meet its ambition of becoming carbon neutral by 2030 and improve business sustainability, Brongain Farm has invested in a rotational grazing platform and is making a concerted effort to make better quality forage to form the basis of cattle diets.

The farm is making the most of home-grown protein and forage which will enable it to reduce reliance on imported feeds, and it says better soil and land management will help increase carbon sequestration from the atmosphere.

Rowan Pickstock, who manages the unit and is the third generation of the family to work in the business, says there is increasing demand from retailers to improve their environmental sustainability.

With the Better Grazing project now in its second season, we visited the family’s farm to find out what strides they have made.

The grazing platform is part of Brongain Farm and comprises 86ha (211 acres).

“The Angus can lay down too much fat if they are pushed too hard,” he explains.

About 36ha (90 acres) has already been reseeded with long-term leys of perennial ryegrass and clover, with tracks currently being installed to make moving cattle easier.

The platform is on a floodplain so in the future they would like to use diverse swards containing chicory, plantain and fescues to improve root mass and aid water infiltration. These diverse swards can not only help increase yields during dry periods, but also aid carbon capture.

To keep things simple and make it easier to take paddocks out of the rotation for silage, semi-permanent electric fencing has been used to sub-divide 4-6ha (10-15 acre) fields in two.

Cattle are grazed in three mobs, with each mob grouped by weight. This includes one group of 80 animals weighing 290kg, 94 cattle weighing 460kg and 99 weighing 557kg, on average.

More recently, a third group of 70 younger animals – weighing 220kg – has been introduced to the platform to help balance out supply and demand, with grass growth accelerating in recent weeks.

The farm’s nutritionist, Iwan Vaughan of Dairy Diagnostics, explains: “The rumen is well developed by six months so you can put calves out to grass without concentrate.

“We aim to get the calves on to a forage-based diet as soon possible to condition and develop the rumen. This allows the calves to be turned out to grass earlier and concentrates can be reduced from the diet at five to six months of age.”

Cattle are housed for six months of the year on average, so the focus is to make the best-quality silage possible to cheapen the winter ration.

Traditionally the farm made two cuts, but is adopting the dairy industry’s mentality by starting earlier in the season, in May, and taking subsequent cuts from the 122ha (300 acre) silage platform every five weeks.

Digestate is applied pre-harvest from Pickstock’s anaerobic digester in Telford. After every cut nitrogen fertiliser is applied. So far this season, 62kg/ha of nitrogen has been spread.

Mowing and raking are done in house and a local contractor is used to chop and ensile the crop. 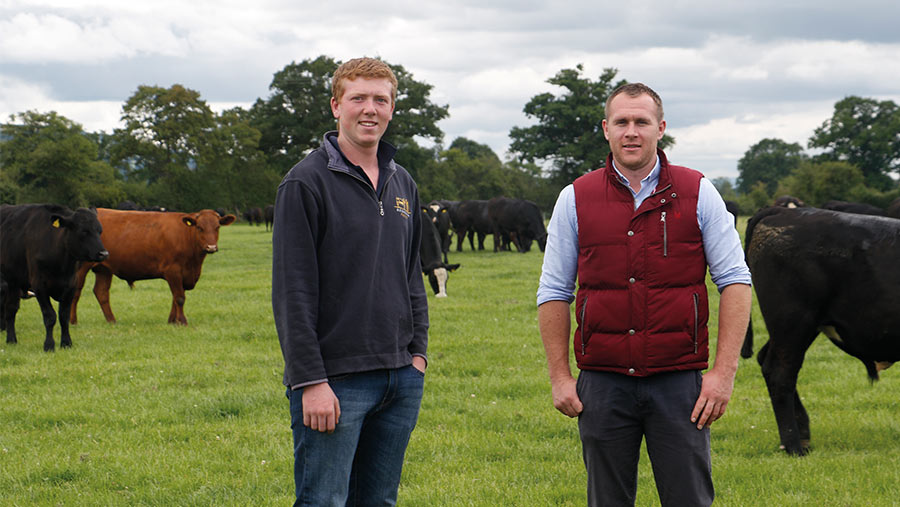 One of the biggest changes has been reducing wilt times to 24-36 hours to preserve quality.

“The forage isn’t a carrier for concentrate. It’s the main part of the diet,” says Mr Vaughan.

Providing silage is good enough, animals will be fed just forage. Only animals three months off finishing are supplemented with 2-3kg of barley, bought locally.

Farmers Weekly will return to Brongain to find out how they are progressing next season.

Stages of the beef finishing enterprise