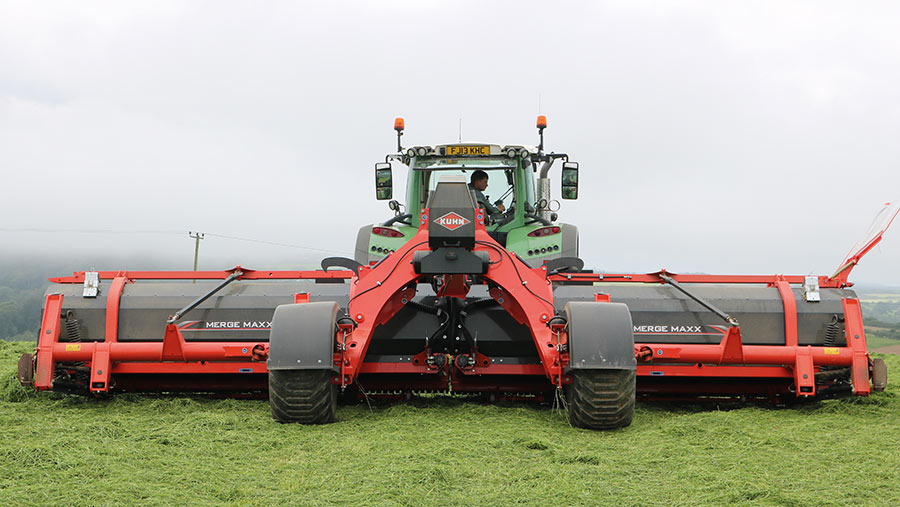 Investing in 9.5m forage merger has helped improve silage quality and production for a family-run dairy unit in Scotland.

“There was a visible stone content in the clamp and we were always sweeping up grit left lying in the feed passageways,” says David.

On some ground the stones flicked up by the forage rake and into the swath would then shatter knives in the forage harvester, he adds.

As well as stones, the tines picked up dirt and dust, increasing the risk of soil contamination in the clamp. Soil-borne bacteria encourage the wrong fermentation process, leading to butyric acid production and increasing the likelihood of poor silage quality.

The Veitchs first saw a rotational tine, pick-up and belt system in the US about 13 years ago.

The gentler action of the machine is known to reduce leaf shatter and preserve silage quality, particularly in more delicate crops such as lucerne.

However, it was only three years ago that the belt system entered the UK market.

Last year, after a visit to Lamma, the brothers renewed their interest in the machine and traded in a conventional Kuhn rake for the Merge Maxx 950.

The machine came with a hefty price tag of £75,000 but the Veitchs viewed the potential for improved forage quality and time-saving as a sound investment.

Watch the video of the Veitch’s machine in action and read the rest of the report below.

Benefits of the Merge Maxx 950

Silage quality and cow performance have improved, although Robert acknowledges that the 2019 grass growing season was exceptionally good and was a contributing factor.

While the growing season was important, the gentler action of the pick-up helped preserve leaf matter and hence improved quality, Robert believes.

One pointer to the improvement can be directly attributed to the new machine. The silage analysis reveals a far lower ash content than previous years.

“This indicates we are picking up far less dirt and stone material which would have increased spoilage in the clamp and reduced the sample quality,” he says.

By eye, the silage is also markedly better. 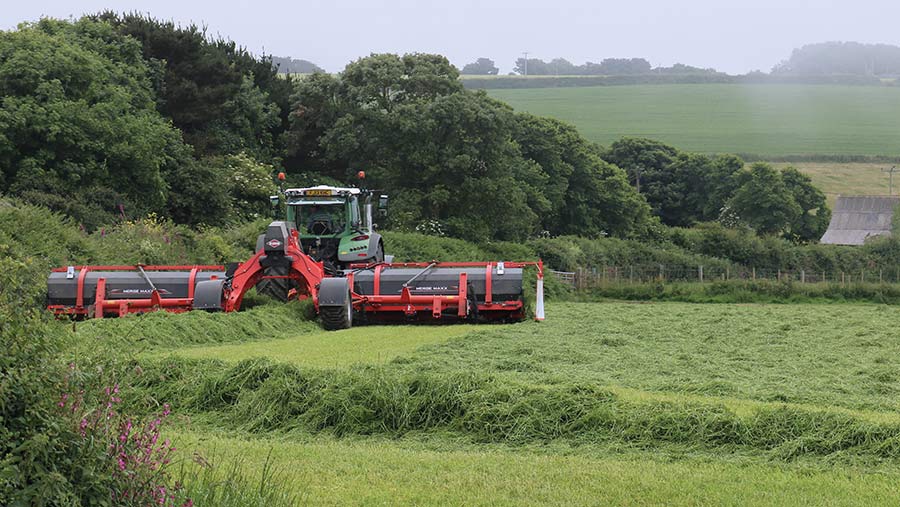 “As the cows used up the 2019 forage stocks, a layer of silage from the previous year was uncovered,” Robert adds.

“The difference in stone content was clearly visible in the layers.”

The machine’s ability to merge rows with an increased travel speed has also proved to be a major advantage.

The belt system can be offset with up to eight settings, allowing lighter crop rows to be merged. The harvester then has far fewer passes to make and can clear a field more quickly.

It is particularly useful if weather windows are tight. That too is an important advantage, farming in south-west Scotland’s changeable weather.

Robert says the time saving was improved still further because, unlike previous years, there were no stops to replace breakages to knives on forage wagons.

How does the merger work?

Kuhn’s Tim Holliday explains how the system differs from a normal rake, where the solid tines scrape across the soil surface.

The merger has banks of tines on a rotating reel that don’t come into contact with the field surface. Adjustable, sprung skids under the machine ensure the tines are kept at a set height above the soil surface.

The tines lift the forage up and on to a hydraulically driven, wide rubber conveyor. The gentle action helps to preserve the leaf area of the cut forage which is where the main quality in the plant lies, says Mr Holliday.

Behind the pick-up reel, the conveyor has eight separate settings that can move the crop in either direction, allowing the size and number of swaths to be controlled.

Two 4m belts provide two working widths – 7.5m and 9.5m. At the 7.5m setting, the two belts are drawn together, providing a left- or right-sided swath to be produced.

By placing two 7.5m rows side-by side on adjacent passes, it is possible in lighter crops to join 15m of crop in a single row.

The 9.5m setting creates a 1.5m opening between the two belts, merging the swath into a central position. It is possible to keep moving the crop across and clear a 4ha (10-acre) field in just seven rows.