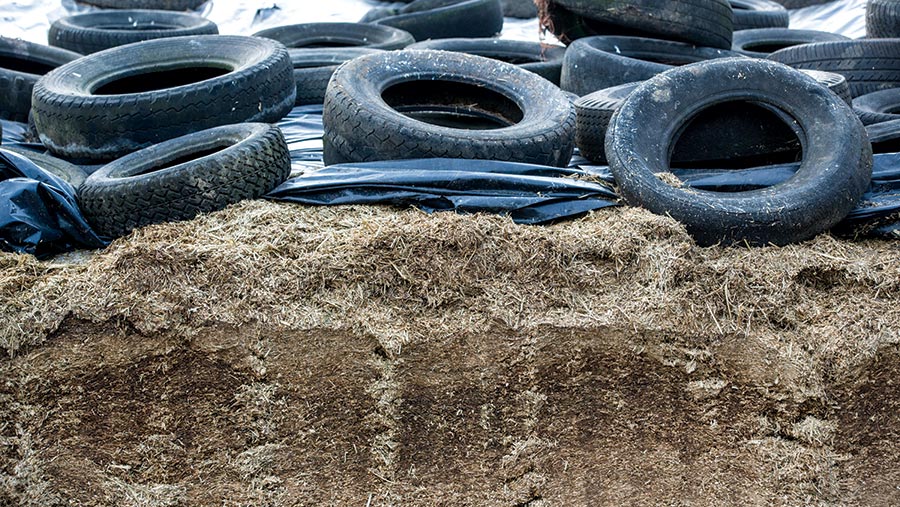 Water authorities are carrying out farm inspections to prevent effluent polluting watercourses. With silage a particular threat, how can farmers ensure they don’t get caught out?

There were more than 30 pollution incidents caused by silage effluent in England and Wales last year, with fines of up to tens of thousands of pounds.

This is a particular area of focus for water authorities, as silage effluent is at least 200 times stronger than untreated, domestic sewage and can kill aquatic life in our rivers.

With farm consultants warning many clamps on farms in England and Wales are not fit for purpose, we get expert advice on assessing a clamp’s viability, and review the regulations for storing silage.

Am I likely to get an on-farm spot check in Wales?

If your farm is in a nitrate vulnerable zone (NVZ) or falls within areas failing to meet the Water Framework Directive, Natural Resources Wales (NRW) environment officers are carrying out inspections.

Farms are also being targeted if cross-compliance has flagged up breaches and polluting issues with stores.

Since 2018, NRW has employed 12 officers as part of a project with the aim of visiting all dairy farms in Wales by March 2021.

They will provide advice on preventing pollution and will serve silage slurry and agricultural fuel oil (SSAFO) notices on farms not meeting compliance.

Farmers who receive notices will need to carry out work or take precautions to reduce the risk of pollution.

Am I likely to get an on-farm spot check in England?

The Environment Agency (EA) says routine checks are being carried out at a “normal rate”.

They highlighted some situations that mean farmers may be more likely to be checked. These included:

Next steps in Wales

The Welsh government has proposed extending NVZ regulations to the whole of Wales under new measures to protect water quality from agricultural pollution.

The review is still ongoing and, as part of this, NRW says the government will be considering the consultation findings on SSAFO in 2015 alongside the subsequent 2016 consultation, which reviewed NVZ zones in Wales.

Next steps in England

The EA says it is currently reviewing the SSAFO regulations to ensure they suit the needs of the farming sector.

It says any proposed changes and timeframes will be open to consultation with the farming industry well ahead of any implementation.

SSAFO regulations regarding the storage of silage in England and Wales were brought out in 1991, and silage clamp regulations have changed very little since then.

“The only significant change is they used to say the floor needed to be impermeable.

“Now, they say it needs to be impermeable and made of concrete or hot-rolled asphalt,” explains Adas technical director Charles Bentley, who specialises in farm infrastructure and pollution control.

However, many silage clamps on UK farms are not fit for purpose and many are non-compliant.

Mr Bentley explains how farmers can carry out simple visual appraisals to ensure clamps meet regulations, offers advice on how to update pre-existing structures and sets out when you should build new ones.

What three essential things must silage clamps include to comply with SSAFO regulations?

How do I know if my clamp is fit for purpose?

Look at the condition of the floor and walls, particularly the apron (front of the pit) because this gets the most traffic.

Check for seepage and blocked channels around the back.

Have the panels become unsealed? Is the concrete floor breaking up? Are there “rocking slabs” of concrete? Are the walls still upright or are they starting to lean over? If your clamp has sleepers as side walls, what sort of order are they in? Are the drains properly maintained or do they block?

There are some horrible-looking clamps about that undoubtedly do pose a significant risk of pollution. But there’s a very big difference between risk and compliance.

If your clamp needs more than just repair and maintenance, you need to talk to either the EA if you’re in England, or NRW in Wales to ensure any action you take is enough to prevent pollution.

Farmers may be concerned about this but the very fact you have notified the EA or NRW means you are aware of the requirements and any issues and you are probably low risk.

It is much better to take this approach than risk a pollution incident.

Are there any particular clamps that pose a greater risk of non-compliance?

It is quite difficult to be compliant if you have a silage clamp in a building next to a feed store or cattle accommodation where they share walls.

It is not easy to put the channel outside the clamp wall when it means the channel is in the shed next door.

To overcome this on a recent project, the channels have been kept within the building by piping them through holes bored in the web of the steel uprights without compromising the integrity of the structure.