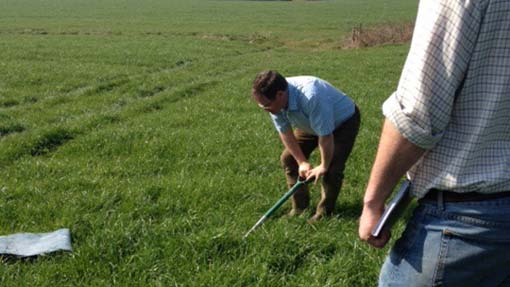 Farmers could be throwing money away buying fertiliser if they are failing to test grassland soils more regularly for nutrients, especially after this year’s heavy rainfall.

If soil pH isn’t at the optimum level, the grass crop will be unable to use nutrients such as phosphate, nitrogen and potash to its full availability, explained John Morgan, Creedy Associates (see table).

Speaking at a farm meeting jointly organised by Sussex Grass and Forage Society and DairyCo at Parkwood Farm, Upper Dicker, he told farmers: “If the soil pH is five, less than half of the nitrogen applied will be available for uptake.”

He calculated that if fertiliser prices were about £300/t, suboptimal uptake would make it even more expensive at roughly £700/t, because only 40% of those nutrients would be used by the plant.

With soil tests only costing between £10-12 per field, he said it would be silly not to take advantage of the additional information it can offer, especially after this year’s unprecedented rainfall.

“Big drivers of lower pH are rainfall and leaching. The only way to assess it is to soil test again.

“My argument would be that fertiliser is so expensive and yield is so important – for a relatively small cost of £10, sampling more often can give you a more accurate picture.”

He added: “The more data you can have the more confident you can be about spending thousands of pounds on the nutrients you need.”

Ideally, Mr Morgan said farmers should aim to test every two years, instead of every four.

Are your soils compacted? Take our soils academy to find out what steps to take next