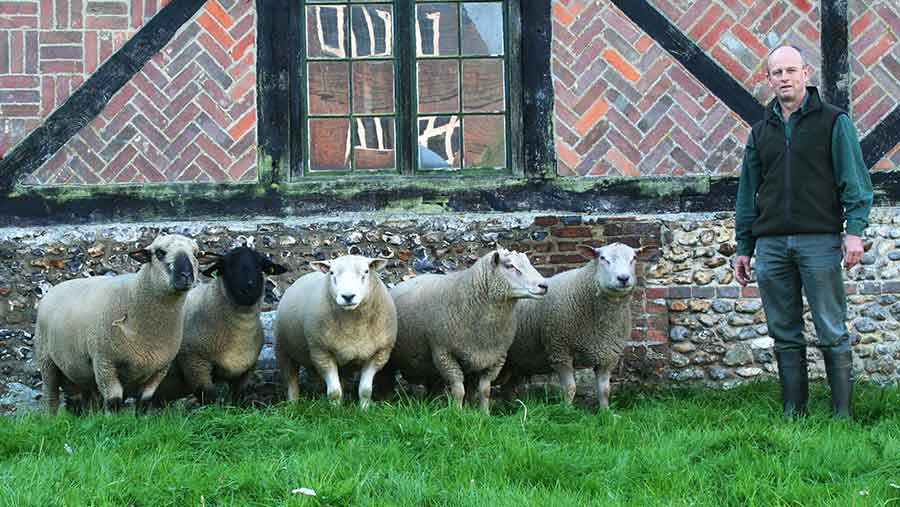 Higher Level Stewardship is a guaranteed income, but it can restrict performance. Gemma Claxton reports on one sheep farmer who plans to leave the scheme.

Getting out of the Higher Level Stewardship scheme is expected to double ewe numbers and improve lamb performance at Chawton Park Farm in Hampshire.

Sheep and deer farmer Ian Robertson and his wife Helen believe this is mainly due to scientific advances in new grass varieties, something that would be inaccessible if they remain in the government scheme due to restrictions on reseeding, fertiliser use and when silage can be cut.

“Under HLS it is hard to increase production. So we’re just getting poorer as there’s a fixed amount they pay you. We want to take advantage of scientific advances in grass quality and be progressive so we’ve got a better chance of keeping up with inflation.”

Having successfully tendered for HLS in 2005, the decision to not apply for the new Countryside Stewardship scheme was not taken lightly. But Mr Robertson felt constrained and wanted to regain control of decision-making.

“The sheep graze 72ha of the farm that is ploughable land so we’re better off out of HLS, though perhaps many sheep farmers would disagree as they like the fixed payment.

“There are still rules from the Basic Payments System, but we’re getting rid of some red tape and covering future costs that will come through,” he adds.

He will leave the 10-year scheme when it ends in February 2016 to avoid having to repay any funds.

Careful calculations using the AHDB Beef and Lamb Stocktake Lite tool, were carried out first to help predict the financial viability of the new system and work out suitable stocking densities on the new leys.

Even by doubling the stocking density from 350 to 700 Lleyn ewes on the 72ha, Mr Robertson calculates there will still be a third more energy available for lamb growth due to the improved grass leys (see Table 1).

Table 1: Predicted performance once out of HLS (shown in the right column) compared to current performance.

Other benefits of pasture rejuvenation will be higher-quality forage, which should enable a higher percentage of fit lambs to be drawn.

“We have been trialling winter cell grazing, which has been very successful, but grass productivity is limited due to the HLS and so we still need some forage for those housed indoors,” says Mr Robertson.

Under HLS silage can’t be cut until July, when it has a much lower D value. But once out of HLS they can cut much earlier. Mr Robertson also hopes to nearly halve the area conserved for hay and silage from 34ha to 19ha and he believes even this may produce more than needed.

Mr Robertson also hopes to increase the number of lambs reared, from 1.55 per 100 ewes put to the ram, to 1.6, as he believes ewes will retain their condition better on the higher-quality grass.

The farm also has 23ha of land for a Red Deer enterprise and while Mr Robertson predicts a 20% improvement in carcass weights and an extra 12 calves a year from better breeding and nutrition, not all of the deer land is ploughable and so cannot be rejuvenated.

Mr Robertson has begun soil analysis and is currently calculating the cost of rejuvenating pastures with Mole Valley, who estimate a cost of £106/acre (£254/ha) to lime, spray off, reseed and treat with insecticide.

And even though gross margins a ewe are fairly similar regardless of the HLS, at £64 a ewe in the scheme and £66 a ewe out of it, Mr Robertson has a clear focus on gross margin a hectare (GM/ha), which he predicts will double when the stocking density does.

“We’re doubling sheep numbers and getting more from the lambs as we’re doubling the dry matter production at a higher energy value. Lambs should grow quicker and the genetic potential we’re developing should come through.”

Mr Robertson plans to increase the flock over a five-year period from home-bred replacement ewe lambs as he knows these will work on his land.

The predicted increase in DM can be clearly seen on the farm’s feed budgets, which Mr Robertson produced to ensure there will be sufficient feed available for the 700 ewes he hopes to run once out of HLS (see graphs below).

The feed budget is also helping Mr Robertson decide on the optimum lambing time to reduce labour and make better use of grass availability.

And while he believes fixed costs such as labour won’t change much at all due to the improved efficiency of running rotationally grazed larger mobs, there are some extra costs involved to improve pasture productivity. These include contracting charges for reseeding and fertiliser spraying. Seed, chemicals and nutrient costs are all included in the gross margin.

But Mr Robertson believes you have to pay more to get the benefits of the research that has gone into developing new leys.

“Some may be reticent to a change that will cost them more, but in reality you need to spend more to get more. We can’t stand still and we can’t control lamb prices so we need to optimise the way we produce and use our cheapest feed source – grass.

”People may be put off but we need to keep driving forward. We need to work with the soil to improve productivity at relatively little extra cost.”

Table 2: Comparison of system in HLS and out of HLS