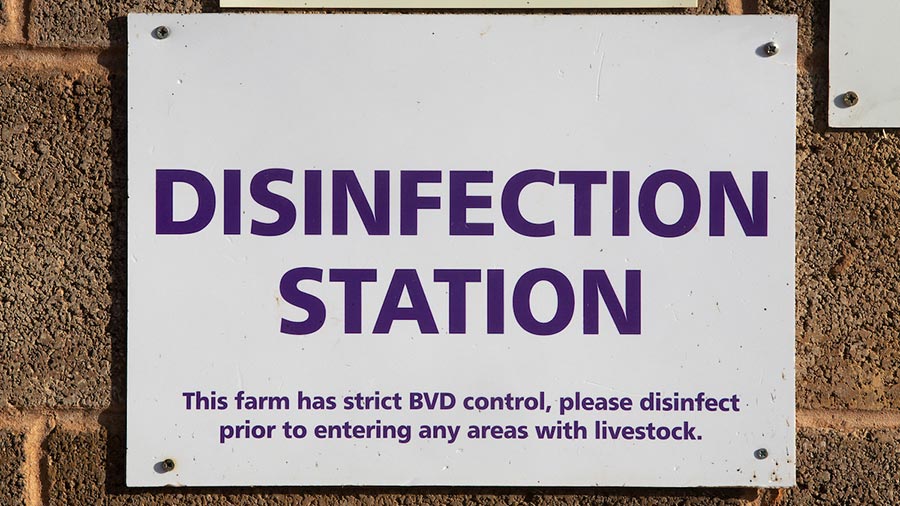 The Welsh government has called for views on a compulsory scheme to eradicate Bovine Viral Diarrhoea (BVD) from the country’s cattle.

The virus is endemic in Welsh herds and can cause abortion, infertility, and the potentially fatal mucosal disease.

Efficiency can also be undermined by the lurking presence of the virus. Estimates suggest BVD costs a 100-cow beef herd about £4,500 a year,and a 130-cow dairy farm £15,000 annually.

The disease is harboured by a small population of animals that become persistently infected (PI).

These PI animals contract the virus in the womb during early pregnancy, a Welsh government spokeswoman explained. While appearing healthy, a PI animal will remain infected for its entire life, acting as a reservoir for the disease and spreading it to others in the herd.

It is likely that 1-2% of animals in infected herds are PIs.

This is a concern because, although a vaccine is available, PI animals cannot be cured and are incapable of building immunity to the disease. They continue to shed virus and present a constant infection risk in herds, the spokeswoman said.

The existing voluntary scheme is due to come to an end in early 2023. It has been a success, with more than 80% of Wales’ cattle herds signed up and screened for BVD.

But the scheme does not insist on the removal of PIs from herds and they can still be sold on, to potentially infect other herds.

It is this potential for PIs to sustain the disease that has prompted the Welsh government to propose the switch from a voluntary to compulsory strategy.

A compulsory scheme would require cattle keepers to test their herds annually for BVD and take steps to isolate PI animals, the spokeswoman said.

Herds that test positive will then be subjected to movement restrictions until they are clear. Ultimately this approach should result in the gradual eradication of the disease.

“We already have a very high take-up in the voluntary BVD scheme in Wales.

“As a result of the high take-up of the voluntary scheme, many cattle keepers will be familiar with the requirements of testing.

“Eradicating the disease will improve animal health and welfare and improve productivity on the farm.”

NFU Cymru has given a cautious initial response to the consultation, saying it would be looking closely at the detail.

“NFU Cymru has been supportive of the voluntary BVD scheme and has been a member of the scheme’s steering group,” said deputy president Abi Reader.

“BVD impacts both animal health and performance, so there is a clear benefit of eradicating the disease for the industry. For that reason, it is very encouraging that more than 80% of cattle herds in Wales have engaged in this work.

“It is the union’s view that any compulsory scheme introduced after the consultation period must be robust and provide accurate, timely information about a herd’s BVD status at the point of sale.

“Any compulsory system must also encourage compliance with proportionate sanctions; transparency is key to ensuring farmers’ confidence is maintained.”

The consultation is available on the Welsh government website