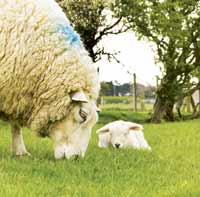 Sheep producers should not assume that successful gutworm treatment means lungworm is no longer a risk, according to Merial Animal Health.

There is concern that success with other parasite control programmes can produce a false sense of security with respect to lungworm outbreaks, says Fiona MacGillivray, Merial vet manager.

“Lungworm is a killer. It is important to understand the disease, be aware of the symptoms and know how to deal with it – even mild infections take their toll on health and productivity.”

It’s usually about the beginning of July that the first cases begin to appear, with worm irritation causing the lungs to produce large quantities of mucus. This then causes the tell-tale symptoms of breathing difficulties and coughing.

Milk yields in adult dairy cows drop immediately, accompanied by a rapid loss of condition. And some cattle exhibit hypersensitivity to the worms, which may even result in sudden death.

“A lungworm policy, prepared in consultation with a vet, should be included in every producer’s herd health plan,” Ms MacGillivray stresses.

While lungworm is not endemic on every cattle farm, it’s essential to know how to deal with it when it appears, and how to prevent it becoming a problem in the first place.

“Rely on your vet’s advice, but generally two wormer treatments – in summer and again at housing – will be sufficient to see off the lungworm threat,” Ms MacGillivray advises.

And producers should not forget the weak link presented by newcomers to the herd. “On a farm where husk is already present, newcomers may be ‘naïve’ and carry no immunity to the parasite; conversely, new additions could bring lungworm into a previously parasite-free herd. Each will need managing appropriately, and remember the larvae can live outside the host for up to a year.”