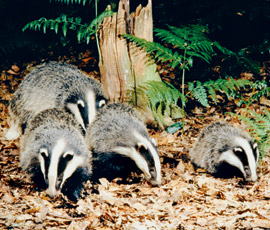 More than 170 activists say they will join a protest against plans for a badger cull to combat bovine tuberculosis.

Campaigners from Animal Rights UK plan to protest outside this month’s NFU annual conference in Birmingham.

A Facebook page set up by protest organisers has attracted support from 175 people who say they will attend the event.

A further 117 people say they may attend the protest.

The Nottingham group invited more than 2000 supporters to attend the protest, which is timed for the morning of Tuesday, 21 February.

DEFRA secretary Caroline Spelman is due to make a keynote speech to delegates at the ICC conference centre at 10.45am the same day.

The protest webpage describes the NFU as the “No. 1 driving force” behind government plans for a pilot cull later this year to combat bovine TB in cattle.

“This is a collection of individuals and corporations most responsible for pushing the proposed badger cull through parliament,” it says.

Highlighting Mrs Spelman’s past employment as an NFU sugar beet secretary, the webpage says the union has strong political ties.

“During their fringe event at the Conservative Party conference, they were boasting how they will be getting the badger cull approved.”

It adds: “We urge as many animal lovers to join us outside the ICC for a huge protest to show Caroline Spelman and the NFU that we will not allow the badger cull.”

The NFU believes a carefully managed and licensed badger cull is vital to reduce the prevalence of bovine tuberculosis in cattle.

Pilot culls scheduled for this autumn aim to test whether the controlled shooting of badgers is humane, effective and safe.

Farm minister Jim Paice held talks with police chiefs before Christmas about the best way of dealing with anti-cull protestors.

He said: “Those involved in licensed activities will be acting within the law and are entitled to carry out those activities without intimidation.”