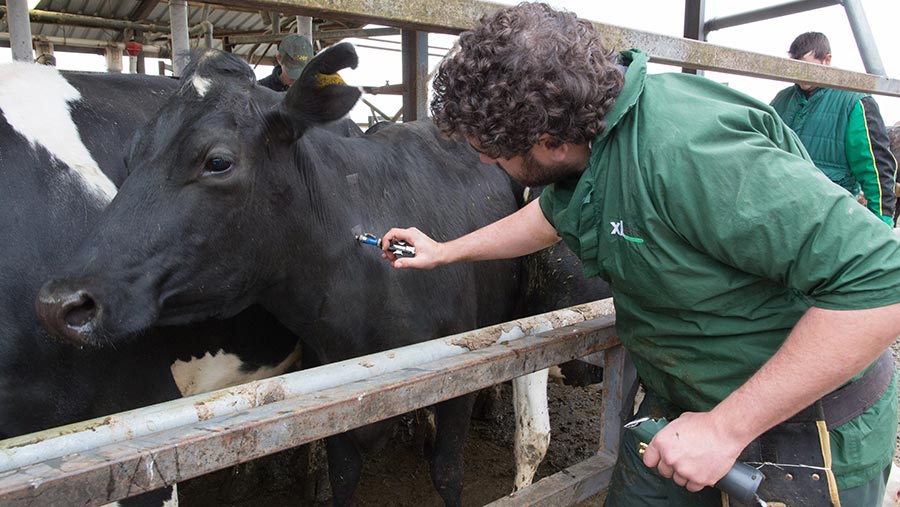 It took more than 15 months to come to fruition, but Defra has finally published its response to Professor Sir Charles Godfray’s 2018 independent review into the government’s bovine TB strategy.

The document – “Next steps for the strategy for achieving bovine tuberculosis free status for England” – sets out the government’s plan for the next phase of its 25-year strategy to eradicate “one of the most difficult and intractable health challenges” the country faces.

Defra intends to adopt a three-pronged approach to this stage of its TB strategy, which aims to eradicate the disease by 2038.

Its top priority is to “accelerate” work on field trials in the UK to develop a deployable cattle vaccine within the next five years, which it says could become a “powerful tool” in the battle against bovine TB.

Second, Defra will evolve its badger control policy to increase support for badger vaccination and ultimately phase out “intensive” culling.

Third, improvement of the cattle testing regime to intercept TB and remove infected cattle earlier will be a key component of the strategy.

Last July, scientists reported a breakthrough in their efforts to introduce a TB cattle vaccine.

Researchers have developed two candidate skin tests for cattle which they say can distinguish between animals that are infected with bovine TB and those that have been vaccinated against the disease with the Bacille Calmette-Guérin (BCG) vaccine.

The research was headed by Prof Glyn Hewinson and Prof Martin Vordermeier, of Aberystwyth University, working at the Animal and Plant Health Agency (Apha).

Evidence was submitted last year to the Veterinary Medicines Directorate (VMD) to apply for field trials of the BCG vaccine and associated Differentiate Infected from Vaccinated Animals (Diva) diagnostic test.

If all goes well, Defra will apply to the VMD to grant marketing authorisations (MAs) for the BCG vaccine and Diva test in cattle in 2023. If the applications are successful, it will then apply to the World Animal Health Organisation (OIE) for validation of the Diva test.

Planning for the field trials to support the authorisation of a new vaccine is in progress. The timeline envisages that the MAs will be granted by the VMD in 2025, and that if the OIE also validates the Diva test, the vaccine will be authorised for deployment in the field “within five years”.

Defra says vaccinating cattle would be “a strong additional tool” in the battle against bovine TB. But it says the scale of disease reduction from the BCG vaccine would depend on local circumstances and “crucially, whether cattle or badgers are the primary source of infection”.

Prof Rowland Kao and Sir Timothy O’Shea, both involved in veterinary epidemiology and data science at the University of Edinburgh, warned this week that field implementation of a reliable TB cattle vaccine “is going to be a significant challenge” and would need “a substantial dedicated effort to accomplish it”.

Defra says it wants to stage the field trials in the High Risk Area (HRA) to evaluate how the tests perform under the most pressure.

But other serious questions remain, such as who will fund it, how effective it will be towards the goal of TB eradication, and what implications it will have for trading vaccinated beef carcasses with the EU and the rest of the world.

Badger culling has now been rolled out to more than 40 zones in England. Last year, 57% of the HRA was subject to licensed culls.

Independent scientific analysis, conducted by Downs and others, has shown a reduction in the incidence of TB in herds in the two original cull zones of Gloucestershire and Somerset of 66% and 37%, respectively, after four years.

But the government will begin an exit strategy from the intensive culling of badgers, while ensuring that wildlife control remains a tool that can be deployed where the epidemiological evidence supports it.

As soon as possible, Defra intends to pilot badger vaccination in at least one area where the four-year cull cycle has concluded, with simultaneous surveillance of disease.

Its aim is to identify an exit strategy from culling in those areas that have completed the four years of intensive culling by deploying vaccination to the remaining badger population.

Opponents of badger culling have described Defra’s decision to phase out culls as a policy U-turn. But this suggestion seems overplayed as this was always the direction of travel.

Defra secretary George Eustice, working in his role as farm minister in February 2018, said “no one wants to be culling badgers forever” as he announced the independent review of Defra’s TB strategy.

Surveillance testing for TB in cattle herds will be increased in two HRA counties – Shropshire and Staffordshire – from annual to six-monthly testing later this year.

Defra expects to extend six-monthly testing to all parts of the HRA from 2021. Lower risk herds in the HRA that meet certain defined criteria for “earned recognition” will continue to be tested at annual intervals.

The government’s response sets out plans to step up engagement with partners across the livestock industry to further develop the bovine TB strategy. Defra has also committed to empower private vets to help farmers eradicate TB from their herds.

Industry reaction to the Defra report

“Sir Charles Godfray noted in his review… that there are no easy answers [to eradicate bovine TB]. That’s why we must use every available option – cattle testing, cattle movement controls, biosecurity, vaccination when available and where appropriate, and control of the disease in wildlife.”
NFU deputy president Stuart Roberts

“The report clearly identifies the trusted private vet as being pivotal for farmer advice, and we welcome the government’s approach to commitment for better support and involvement for vets to gain further expertise in this area.”
Rebecca Cavill, lead on bovine TB, British Cattle Veterinary Association (BCVA)

“It would have been amazing to stop the cull immediately, but this is really not practical. The training needed to vaccinate badgers requires performing vaccination under supervision, so vaccinator capacity can only build up gradually.”
Prof Rosie Woodroffe, senior research fellow, Zoological Society of London (ZSL)

“We are pleased by the government’s response to our report and the positive reaction to our advice and recommendations.”
Prof Sir Charles Godfray, who led the independent review in 2018

Gloucestershire beef farmer David Barton is concerned that any sudden shift away from badger culling to vaccination could undo all the good work done by farmers over the past seven years.

“We have a policy that is working,” Mr Barton says. “The Downs report shows that after four years of culling badgers in Gloucestershire, we found a 66% reduction in new TB herd breakdowns. This is peer-reviewed science. Nothing in the last 30 years has got us results like that.”

Mr Barton says there is no scientific evidence to show that vaccinating badgers in HRA counties such as Gloucestershire will have anywhere near the same impact as culling.

“The cost of a national badger vaccination will be enormous,” he adds. “Who is going to pay for it? Farmers may not be so supportive to back a policy which may or may not work.”

Mr Barton says he is encouraged by the work of Apha scientists to deliver a reliable Diva test that can differentiate between vaccinated and infected cattle.

But he adds: “We need a better vaccine than the BCG. If you vaccinate your herd, it will only provide 70% protection. It may be a bit of a false dawn.”

The phasing out of intensive badger culling in favour of vaccination needs to planned carefully with evidence that badger density is reduced to a level so that TB is less sustainable in the population.

That’s the view of Derbyshire-based vet Sarah Tomlinson, of Westpoint Farm Vets, who is also a member of the TB Eradication and Advisory Group for England.

“We must not withdraw this too soon and lose the hard work that has been put in by farmers,” Ms Tomlinson says. “We also need to ensure we have the evidence that vaccinating badgers reduces TB in cattle, which is ultimately what is costing taxpayers £150m a year.

“Again, this need for evidence is clearly mentioned in the response.”

Ms Tomlinson welcomed the government’s acknowledgement that the badger culling policy delivered “by the hard work and at expense of farmers is proving to be very successful at driving the incidence of cattle TB down”.