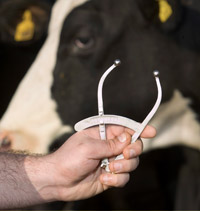 The west Wales family that has already seen 550 cattle slaughtered because of bovine TB has decided to completely destock until at least the end of next year after it was announced the cull count will hit 800 this week.

By 13 February all of the farm’s cattle, totalling more than 800, will have been culled at Ffosyficer Farm at Abercych, Dyfed, which has been under bTB restrictions since 2001.

“We have a number of very important financial and emotional decisions to make here regarding the future of keeping cattle at Ffosyficer and want as much advice as is possible regarding the potential bTB risk to new cattle before any are purchased,” said Tom Harris, who farms with his parents Laurence and Eira.

The family, which also runs the award winning organic milk drink company Trioni, announced the decision in a letter Tom Harris sent to the Badger Trust, in which he insisted that they were totally committed to a future producing and marketing milk, but not under current circumstances.

“With other outbreaks being confirmed in the surrounding area on a growing level, the family believes a total clean-up of both buildings and, wherever possible, grazing ground is the only avenue open given the nightmare experience of recent weeks,” the letter said.

“It is in all our interests to rid bTB from this area before it gets rid of cattle, badgers and farmers themselves. This, I hope you agree would not be in the best interests of the Welsh countryside.”

Mr Harris added that the need to find the most effective way of tackling the disease was why the Trust, and all others with an interest in the problem, had been invited to take part in full and frank discussions before the farm was restocked.

“I can assure you we have no hidden agenda. The main purpose of this meeting is therefore to look at whether the various parties can assess how best, if at all, we can bring clean cattle on to a clean farm.”

“We do not want it to turn into a finger-wagging session, but rather a constructive meeting to iron out how we go forward here.”

The Harris family hopes that the meeting can take place in March.