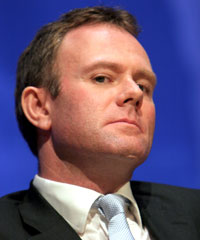 The government must stand back and let farmers and rural businesses get on with what they do best, according to shadow agriculture minister Nick Herbert.

Speaking at the Royal Cornwall Show on Thursday 4 June, Mr Herbert said the most common plea from rural businesses was to trust them to get on with their jobs. “We’ve got to stop interfering so much in peoples’ lives.”

Farming was essential to the management of the countryside, and to feeding the British population, and the government had to recognise this, he added.

DEFRA had to refocus on creating a profitable farming industry, and return “farming” to part of its title. “We need a government that gets behind farming, in a way that has been absent for the past 10 years.”

Rural communities felt disconnected with the central decision-makers who meddled in the everyday running of their lives, said Mr Herbert. He advocated a return of power to local communities, to engage them in the creation of policy and rebuild trust in the Government.

However, with the country on the verge of bankruptcy, Mr Herbert could not commit to reversing cost sharing proposals, or to further spending.

“The cupboard is bare, and rebuilding a government that understands living within its means is going to be a huge challenge.” However, if farmers were to pay a disease levy, they must have a fair say in responsibility sharing, he added.

Rural businesses could play a key role in rebuilding the economy, as they had led the way in recent years through sustainable growth.

But they had to be supported by the government. “What we cannot do is say to farmers that they’ve got to stand on their own feet, and with the other hand clobber them with more regulation and bureaucracy. That is not a viable policy.”

Dairy farmers in particular were being hampered by the near-monopoly of supermarket power, and the Conservatives were calling on retailers to sign up to a voluntary scheme on clearer labelling.

“If consumers know where their food comes from I’m sure they will buy British, he said.” If Tesco and Sainsbury – the two “villains” of the supermarket world – would not sign up to the scheme the Tories would legislate to force them to do so.

Mr Herbert also reinforced previous vows to introduce a badger cull as part of a package to deal with TB.

“Unless we deal with this issue more badgers are going to suffer in the future – it’s precisely because we care about animal welfare that we have to take this decision.”