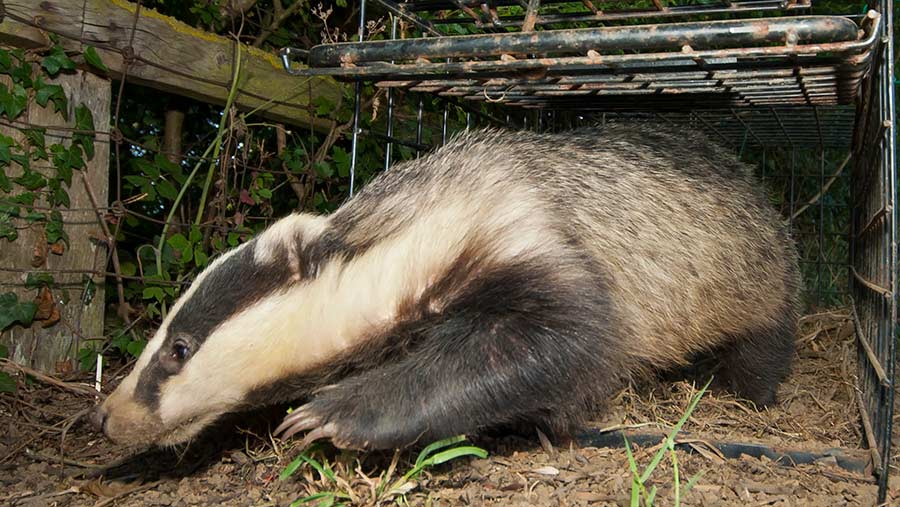 Farmers will be asked to vaccinate badgers in East Sussex as part of a major, large-scale badger vaccination trial.

Defra announced on Thursday (27 May) that the government had awarded £2.27m of funding to enable farmers to administer the vaccinations over an area of the South Downs spanning 250sq km.

The government says the results of the five-year trial will help inform how it rolls out future vaccination schemes at scale across England, as part of its plans to phase out badger culls.

The announcement has drawn a mixed reaction from farmers, who say there is no strong scientific evidence that vaccinating badgers with the Bacille Calmette-Guérin (BCG) vaccine has any significant impact on reducing the levels of bovine TB in cattle.

“The initial findings of the first year were that 53% of those badgers had TB. At the end of the four-year period, 31% of badgers had TB. But when you compared that to the control group, 33% had TB,” he said.

“From my point of view, as a dairy farmer, I only need one infected badger to infect my cows, then my herd will be put under restrictions.

“There is no evidence – yet – that vaccinating badgers reduces cattle TB.”

Mr Latham said a reduction in badger population density through Defra’s culling programme was working to lower TB rates on farms across England. “We have a strategy [culling] that is working well, so why are we allowing it be replaced by an unproven one [vaccination]?” he said.

Mr Latham drew parallels with the government’s handling of the coronavirus pandemic, in which ministers have come under fire for not following the science.

“Civil servants fear making unpopular decisions,” he said. “It comes back to politics and governance. Will we have a TB policy based on science and evidence, or politics?

“If the goal is to stop culling badgers, that’s fine. But if it’s to eradicate bovine TB we should not in any sensible way be taking culling off the agenda in the foreseeable future as it is the only tool that we have employed which has changed the demographic of the disease.

“For some people, not culling badgers is the goal. But for farmers, this is a disaster.”

Defra has also confirmed that the licensing of new intensive badger culls, which it acknowledges “have effectively helped reduce bovine TB rates by half in certain areas”, will cease after 2022.

In addition, the department says existing cull licenses could be cut short after two years, down from five years, where sufficient scientific evidence supports this, and there will be no option for them to be renewed.

Meanwhile, work to develop a cattle vaccine and associated Diva diagnostic test which can differentiate between infected and vaccinated cattle is under way.

Field trials are expected to start in June in England and Wales. If successful, the government hopes the project will deliver a deployable cattle TB vaccine and Diva test by 2025.

Defra secretary George Eustice said: “The badger cull has led to a significant reduction in the disease but no one wants to continue the cull of a protected species indefinitely.

“That is why we are now building on this progress by accelerating other elements of our strategy, including cattle vaccination and improved testing, so that we can eradicate this insidious disease and start to phase out badger culling as soon as possible.”

In the past year more than 27,000 cattle in England have had to be slaughtered due to bovine TB, costing taxpayers about £100m.

The National Farmers Union (NFU) has lambasted the government over plans to phase out badger culling in favour of vaccination.

In its response to its consultation on the future bovine TB strategy for England, Defra has confirmed that it will no longer licence badger culling after 2022, alongside shortening and restricting supplementary badger cull licensing.

The NFU said it did not support the measures because it went against the science and evidence, which shows badger culling is an effective measure to control the spread of bovine TB, alongside other controls.

“It also ignores its own evidence in its consultation which showed the current strategy, which includes badger controls, delivered reductions in TB incidents in cull areas by 51% after four years.”

Mr Roberts said it was “incredibly disappointing and frustrating” that the government was pressing ahead with its proposals to abandon culling.

“The government should be making decisions based on the science and evidence, which clearly shows that badger culling is effective in controlling the spread of this disease,” he added.

“It’s apparent from this decision the government has abandoned making policy based on science and evidence. This is a very worrying direction of travel.

“I want to be very clear – this decision will potentially have far-reaching and severe impacts for cattle farmers across the country.”

The NFU pointed out that Animal and Plant Health Agency’s own analysis of the Badger Vaccine Deployment Project (2010 to 2015) – one of the largest badger vaccination trials conducted – concluded that vaccinating badgers “had no effect on cattle bovine TB incidence”.

The government has announced details of a new training scheme for people willing to vaccinate badgers as part of its efforts to tackle bovine TB.

Its “Train the Trainer” scheme is being launched to allow more people, including farmers, to become qualified vaccinators.

The scheme enables anyone to receive a certificate of competence in badger vaccination, which is required to apply to Natural England for a licence to vaccinate badgers.