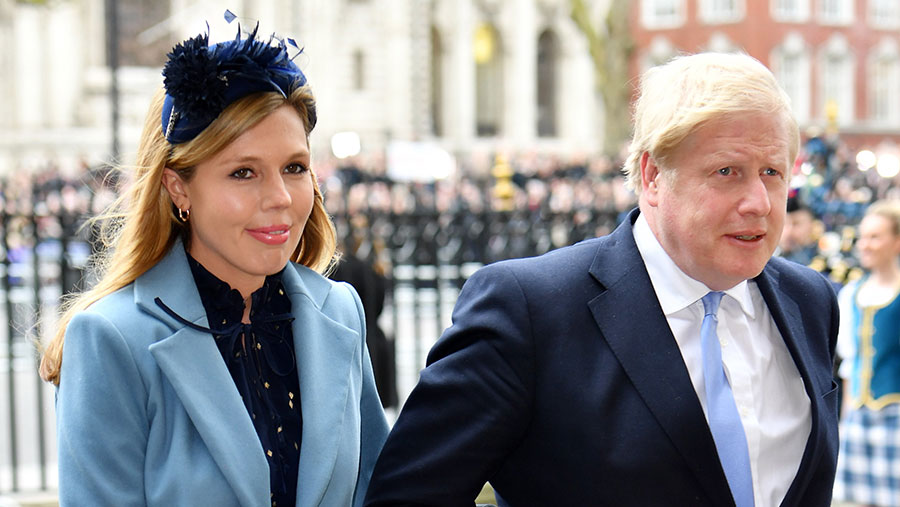 Boris Johnson encouraged the then farm minister George Eustice to consider carefully plans to cull badgers in Derbyshire to tackle bovine TB, after his partner Carrie Symonds took an interest in the issue.

Just days after the meeting, the prime minister informed Mr Eustice, who at the time was Defra farm minister, that while the ultimate decision was his, he should give careful consideration to the issues raised in Derbyshire, documents in a High Court ruling reveal.

This is despite the government’s own chief veterinary officer (CVO) and chief scientific advisor both supporting the move.

The NFU, which supported the farmer-led application, brought a legal challenge against the government over its 11th-hour decision to cancel plans for a badger cull in Derbyshire last September.

But the judicial review challenge was dismissed on all grounds. In her ruling, Mrs Justice Andrews acknowledged that “countervailing political considerations” led to no licence being granted.

But the judge concluded that there was “nothing irrational” about the decision for the democratically accountable decision-maker.

“The weight to be given to the various competing factors was a matter for the secretary of state, and whereas a scientist undoubtedly would have weighed those factors differently, that does not make the decision irrational,” said the judge.

Her ruling said the prime minister took a “personal interest” in the matter after an MP in the constituency of Derbyshire, lobbied by anti-cull campaigners, raised concerns about the possibility that badgers being vaccinated under the Derbyshire Wildlife Trust’s (DWT) badger vaccination project may roam into cull zones and be killed.

On 2 September 2019, Mr Eustice sent a personal letter to Mr Johnson telling him he was minded to allow the badger cull in Derbyshire to go ahead “subject to taking steps to mitigate the risk that vaccinated badgers would be killed by introducing buffer zones around licensed vaccination sites”.

In his letter, Mr Eustice stated that “the very clear expert veterinary and scientific advice is that the cull should proceed in Derbyshire on disease-control grounds”.

The minister’s two main reasons were that Derbyshire had the second-highest rate of TB and the highest number of TB herd breakdowns overall – and that the DWT vaccination area was outside the proposed cull zone.

There was no response to Mr Eustice’s letter.

The ruling also revealed that Mr Johnson “indicated a reluctant acceptance that all the September culls should go ahead as planned” and spoke again with the minister to raise his specific concerns about Derbyshire.

Following this conversation, Mr Eustice decided to rethink the situation, and he commissioned government policy officials to come up with various options, including 200m buffer zones around vaccinated areas, which was put forward as the “preferred option” – to mitigate the risk that vaccinated badgers would be culled.

Around this time, Mr Eustice also had a discussion with Zac Goldsmith, the minister of state for the environment and international development.

Mr Goldsmith, an opponent of badger culling, indicated that he would support the independent Godfray review’s recommendations of a shift in balance towards vaccination, the ruling reveals.

On 3 September, the NFU was told by a senior official at Defra’s Animal and Plant Health Agency there were “serious concerns” about its Derbyshire application.

NFU leaders told Defra they did not support the introduction of buffer zones at such a late stage in the application – and that culling should be licensed for the whole area or not at all.

The chief vet said that introducing the buffer zones would still result in culling taking place over 88% of the proposed area and stated that no cull “would mean losing ground in the fight against this disease”.

In the late afternoon of 4 September, Defra officials who had been advising Mr Eustice were told he now took the view that “the safest option is for the secretary of state to give a direction to Natural England (NE) not to licence culling this year, but to pause so that a better disease-control strategy for the area can be developed for next year”.

The decision to issue the direction to NE not to license the Derbyshire cull was taken by Theresa Villiers, who at the time was secretary of state, “on the advice that she had received from the minister”.

NFU deputy president Stuart Roberts said he was “shocked and dismayed” by the decision of the High Court to reject its appeal.

“The actions of the government last September amounted to a complete U-turn on established government policy,” said Mr Roberts.

“The 11th-hour direction by the secretary of state was made against absolutely all the scientific and veterinary advice and left farmers in the Derbyshire area, who met all the licence criteria, completely devastated.

“Many of them had seen this cull as their last hope at dealing with this awful disease, which has been devastating their cattle herds and crippling their business for years.”

Commenting on the High Court decision, Mr Dyer, chief executive of the Badger Trust, said: “We were pleased to see the prime minister took note of the concerns we raised in our open letter to him in September on why a badger cull licence should not be issued in Derbyshire.

“The High Court judgment shows he was highly engaged in the decision-making process to withhold a cull licence in Derbyshire and we are pleased to see that the judge accepted his intervention in this case was both legitimate and lawful.”

Mr Dyer urged the government to continue its plans for an exit strategy to badger culling based on badgers and cattle vaccination combined with improved TB testing in cattle and tighter biosecurity and movement controls.

But Derbyshire vet Sarah Tomlinson said: “The positive thing to come out of this judicial review is that it has been publicly aired by an independent person [the judge] that the science and evidence given by the CVO and chief scientific advisor was that Derbyshire needed and should have been given a badger-culling licence.

“It was the prime minister and secretary of state who stopped it.”

The NFU is considering its next options with its legal team and the affected farmers in Derbyshire.