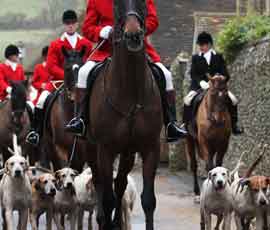 Animal rights campaigners have urged the government to probe a possible link between hunting and the spread of bovine tuberculosis.

Vegetarian group Viva! have claimed the crippling disease in cattle could be spread through animals used for hunting and vehicles travelling across large areas of land.

The group said it believed the disease could be passed to cattle through actively infected soil or faeces.

Viva! said the “onslaught of rampaging feet, hound’s noses and tyres almost certainly acts as a disease and muck spreader on an enormous scale”.

Justin Kerswell, campaigns director at Viva! told the This is North Devon website said: “It is possible that no link between these hunts and the spread of cattle TB has been ascertained because it has never really been looked at.

“That does not mean that it isn’t a considerable vector. Drag and trail hunts still gallop over vast swathes of land, churning it up and potentially taking the infection – which can live in the soil and animal droppings – with them.

“How can the government be thinking of killing many thousands of badgers when it doesn’t appear that hunts have ever been held accountable for their potential role in spreading the disease?”

Viva! said by overlaying visual illustrations of the location of hunts and the highest rates of bovine TB, a “clear correlation” is shown.

However, DEFRA dismissed the claims as well as the Countryside Alliance who labelled it as “pseudo-science”, saying that Viva! were “embarrassing themselves”.

Jim Barrington, animal welfare consultant for the Countryside Alliance, said: “In my 40 years working in animal welfare I have never seen or heard of Bovine TB being spread by hunts.

“The pseudo-science Viva are using is to lay one piece of evidence over another and claim a false correlation. Farmers, government and animal welfare advocates have spent several decades trying to combat bovine TB and in all that time no-one has ever linked its spread with hunting.

“As with so many people and groups who claim to represent the cause of animals, they are letting their own blind prejudices inform proper research and evidence, and in doing so are embarrassing themselves and the people who would otherwise be supportive of their viewpoint.”

A DEFRA spokesman said: “There is no evidence that hunting contributes to the spread of bovine TB. There is no obvious correlation between the location of hunts and high incidence of TB in cattle.”

Two badger cull pilots – in west Somerset and west Gloucestershire – are due to begin in early autumn.

The pilot culls will test whether the controlled shooting of badgers is humane, effective and safe. If successful, they could lead to the creation of a further 10 cull areas in England in 2013.

• Read more on bovine TB and the planned badger culls on our dedicated page. Or have your say on our forum.