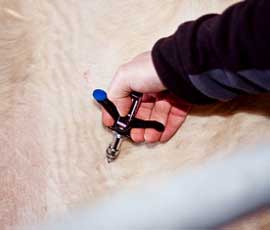 Livestock farmers have been warned that cattle control measures will tighten further as part of the government’s strategy to eradicate bovine TB.

Speaking during a workshop at the NFU conference, farm minister Jim Paice warned that there were some “relatively small, but important changes” in the pipeline.

Mr Paice said that over the past two or three years controls had been strengthened in a bid to reduce cattle-to-cattle transmission of the disease.

But a change still to come was reducing compensation for those farmers who failed to test on time [as is currently the case in Wales] and subsequently went down with a reactor.  “People who don’t test on time are letting down the whole industry,” he said.

Chief vet Nigel Gibbens added that some of the current exemptions to the pre-movement rules would also be revised.

According to a DEFRA source, the exemption that allows farmers to move cattle to shows without pre-movement testing will be removed if the cattle are housed together overnight. The intention is also to remove the 30-day exemption which allows producers to move an animal without testing if it is within 30 days of it arriving on a holding.

The final change will relate to Single Occupancy Authorities (SOAs). DEFRA is looking to revise the current rules so if linked SOA premises are in different levels of TB risk then TB testing rules will apply.

Mr Gibbens also spoke of the need to expand the areas that are subject to more frequent TB testing in order to get ahead of disease. “At the moment we have a history of being behind the disease spread.”

In an hour and a half session dedicated to the issue of bovine TB, which was attended by about 200 farmers, Mr Paice also warned that the pilot badger culls were part of a wider package of measures and there was a need to explain to the public they were not a quick fix.

Vaccination would also play a role in tackling the disease, although the badger vaccine was not currently a realistic option for a wide scale rollout.

Cattle vaccination was probably the longer term solution, but a change in EU law was required to make its use legal which might take several years, he explained.

The minister called on government and farmers to form a strong and professional partnership to set in train the process of eradicating TB. But he warned that it might take 20 years.

NFU president Peter Kendall agreed that there was still a long way to go.

He also urged farmers to play their part in explaining to the public why they believed badger culling was a necessary part of a strategy to control TB.

“It is incumbent on all of us to continue to explain in the local media what this is all about and what TB has done to your farming businesses. When you explain what it has done to you over the past 10 or 15 years then that helps enormously.”