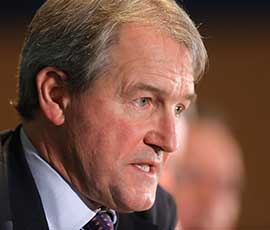 The government will not be “knocked off course” from its badger cull policy, DEFRA secretary Owen Paterson has insisted.

“This is a four-year programme. We’re not going to drop our spades and run away in the first few weeks,” said the minister.

Marksmen in the two pilot zones of west Gloucestershire and west Somerset failed to remove enough badgers to reach the 70% target within six weeks, so culling has been extended in both areas.

Giving evidence at an Environment, Food and Rural Affairs (EFRA) select committee hearing on Tuesday (29 October), Mr Paterson said: “All we are doing on these two pilots is establishing whether controlled shooting is a safe, humane and effective way of removing wildlife.

“This is very early days. We are not going to be knocked off course on this. Sadly, a badger vaccine does not work on diseased animals and a cattle vaccine is not ready.”

Mr Paterson said that the previous government’s policy of only bearing down on the disease in cattle failed. Up to July this year, 20,000 more cattle have already been “hauled off to slaughter” in the UK due to TB, he added.

“It’s not an option to carry on, only addressing this bacterium in cattle.”
Owen Paterson, DEFRA secretary

He added that bovine TB was “rampaging on” in the background and unless the spread of the disease is dealt with in wildlife, there would be no cattle industry to speak of in this country – and the disease could also put domestic pets at risk.

“It’s not an option to carry on, only addressing this bacterium in cattle,” he said.

“There’s no other country in the world that has attempted to get rid of this disease without attempting to tackle it in wildlife.”

Mr Paterson told MPs it appeared that the pilots had shown to be safe and humane, but an independent panel of experts would have the final say.

However, it was “obvious” that the “arbitrary” six weeks were “not long enough” for marksmen to reach the minimum target of culling 70% of the badger population in each area.

But he pointed out that under the previous Labour administration, three of the 10 randomised badger culling trials (RBCT) had only removed 32%, 35% and 39% of badgers in their first year, yet they went on to reduce disease in cattle after culling continued in following years.

“Some areas (in the RBCT) got off to a slow start, but they caught up. At the end of these pilots, we will catch up,” he said.