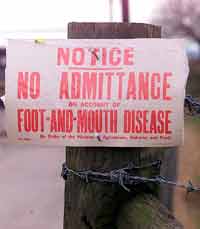 The tenth anniversary of the 2001 foot-and-mouth outbreak, one of the worst epidemics that the modern world had ever seen, is just weeks away.

The outbreak had a profound impact on the farming community, brought the countryside to a standstill and even delayed the General Election.

Farmers Weekly wants to hear your reflections on that time and your thoughts on how the outbreak has changed your business and the farming industry in general.

The outbreak was first confirmed after vets were called in to look at some pigs awaiting slaughter at an abattoir in Essex on 19 Feb 2001.

What was not known at that point was that the disease was already incubating in more than 50 locations from Devon in the south to Dumfries and Galloway in Scotland.

Strict movement controls were introduced but a delay in their implementation meant that the disease had already spread beyond anyone’s expectations.

It spread across the country and between February and September 2001 a total of 2030 cases of the disease were confirmed.

The final confirmed case was on 30 September 2001.

Share your thoughts on the 2001 outbreak, how it changed your farm business and the farming industry in general on our forums or by emailing us.