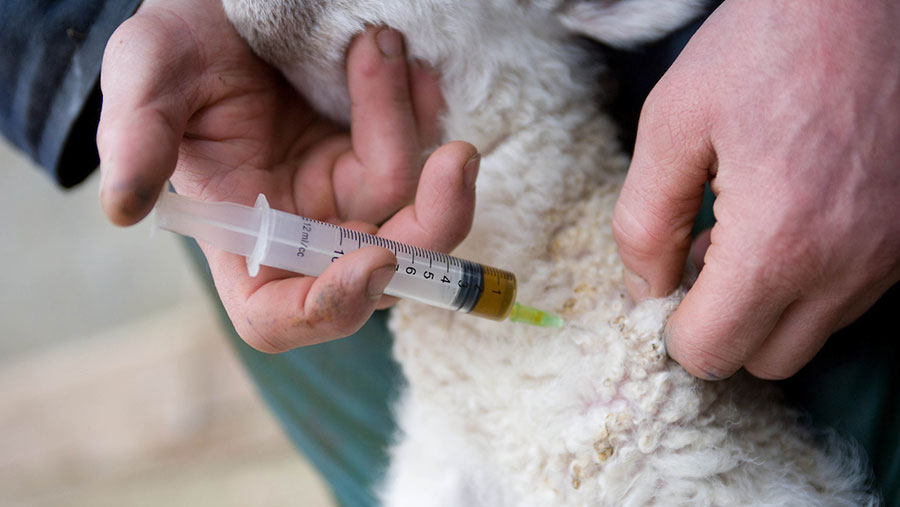 A lamb being injected with antibiotics © Tim Scrivener

Senior medical experts have called for an immediate ban on the routine use of antibiotics in agriculture.

Fifteen senior medics have written to the UK government calling for urgent action to tackle what they describe as the routine misuse of antibiotics in farming.

They argue that there is compelling evidence linking the overuse of antibiotics in farming and resistance to antibiotics in human bacterial infections.

See also: Farmers must ‘do their bit’ on antibiotics

The letter was published in the Daily Telegraph on Monday (14 November) to coincide with World Antibiotic Awareness Week.

It urges the government to “immediately introduce a UK-wide ban on the routine preventive mass medication of animals, and to urgently curb farm use of the ‘critically important’ antibiotics”.

Mass medication of intensively farmed livestock, particularly of pigs and poultry, accounts for nearly 90% of all farm antibiotic use in the UK, says the letter.

It remains legal in the EU to routinely administer antibiotics to whole groups of livestock before any disease has been diagnosed within the group.

The letter was coordinated by the Alliance to Save our Antibiotics and Medact, a campaign group for health professionals and others working to improve health worldwide.

Maureen Baker, chair of the Royal College of General Practitioners, said doctors were doing an excellent job of reducing prescriptions for antibiotics.

But she added: “It’s not just the healthcare sector that has responsibility for curbing resistance to antibiotics; the agriculture sector must also play its part.

“If antibiotics continue to be given to livestock when they are not needed it will put patients at risk all over the world.”

In March 2016, the European Parliament voted for an EU-wide ban to all routine antibiotic use in farming – a proposal that will now be further considered by the EU.

The letter signatories urge the UK government to take a strong stand in these discussions, and to ensure that, post-Brexit, such measures are enshrined in UK law.

Jane Dacre, of the Royal College of Physicians, said: “There is a clear need for unambiguous domestic policies which ensure that antibiotics are used judiciously in human and animal medicine.”

But the letter was described as “orchestrated rhetoric supported by scant facts” by Ruma – the agricultural and food industry alliance which promotes responsible use of medicines in farm animals.

It said the sector currently used 37% of the UK’s antibiotics to manage disease and infection, and produce safe food from more than a billion farm animals in the UK every year.

Strict withdrawal periods meant antibiotic residues in food were not an issue, but overall use, as in human medicine, must fall, said Ruma, because farming played its part in reducing the spread of antibiotic-resistant bacteria.

The farming industry was taking the situation seriously, the alliance stated.

In poultry meat production total antibiotic use fell by 43% between 2012 and 2015 and the use of some critically important antibiotics halved; in 2016, a further commitment was made to stop the prophylactic use of fluoroquinolones in day-old chickens.

“The UK is among the lower users of antibiotics in farming within the EU,” said Ruma.

“We are pushing ahead with setting our own sector-specific objectives to cut and refine use through a Ruma-led Targets Task Force set up earlier this year.”

The UK pig industry said it, too, was stepping up to the challenge of reducing antibiotic usage.

The National Pig Association said excellent progress was being made in implementing a stewardship programme for reducing and refining antibiotic usage in the pig sector.

It includes key strands on recording antibiotic usage, education across the supply chain and responsible use of medication on farms.

The NPA said practices were changing on farms, with one of the UK’s biggest pig producing companies in the process of stopping the administration of antibiotics through feed.

The NPA said it was also looking at strengthening the training requirements for pig farm staff to ensure the responsible administration of antibiotics.

NPA senior policy adviser Georgina Crayford said the immediate priority for the pig sector was to ensure the sector was able to agree fair and proportionate usage reduction targets.”

Dr Crayford added: “Everyone understands the need to reduce and refine antibiotic usage and the livestock sector has been working hard to achieve this.

“But we also need to be clear about what constitutes responsible usage on farms. And, in line with the One Health agenda, we must ensure the health and welfare of livestock are not compromised by the setting of unrealistic targets.”