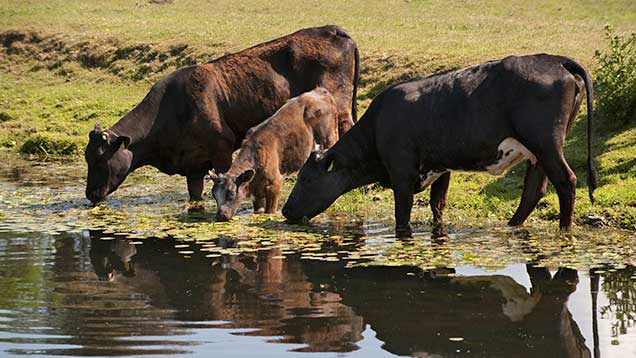 Defra has issued a reminder to livestock farmers that they must take steps to protect their stock with temperatures forecast to reach as high as 35C midweek.

Forecasters are predicting a very warm, occasionally hot and humid, week across the UK, with temperatures expected to be at their highest on Wednesday.

The Weather Channel is suggesting temperatures as high as 35C are possible in south-east England on Wednesday (1 July), which would mean the UK record for temperatures recorded on 1 July would be broken.

See also: What dairy farmers must do to prepare for high temperatures

The Met Office has also said it expects to see temperatures reach 32C or 33C on Wednesday in parts of the south-east and central England, with an isolated chance somewhere might see 34-35C.

If temperatures do rise this high, the UK will be hotter than Jamaica and the Maldives.

The temperatures will peak as the Royal Norfolk Show opens its gates for business (1-2 July), although the forecast for the showground is for a slightly more manageable 28C.

Scotland could see highs in the mid to high 20Cs, although it may be cloudy there at times.

The government has warned the high temperatures can pose a major threat to animal welfare.

“Those who look after animals must avoid causing them unnecessary suffering [it is a legal requirement], and must avoid subjecting them to conditions where this is likely to occur,” it said.

“It is an offence if the welfare of an animal is compromised as a result of a failure to take appropriate action in response to extremes of temperature.”

Defra has pointed to guidelines which say farmed animals should be provided with adequate shelter and protection in accordance with the law and welfare codes.

It says anyone needing to transport animals should avoid loading or moving animals during the hottest parts of the day, increase space allowances in the vehicle and provide water more frequently than normal.

“In addition, contingency plans should be in place for every journey, and are particularly important in hot conditions as delays, which might be relatively insignificant under normal conditions, can become critical very quickly.”

The guidance notes also give an indication of how much water is required by each species on a daily basis. The volumes are as follows: