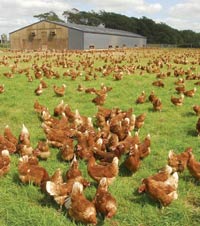 A Hampshire poultry feed manufacturer has welcomed the RSCPA’s decision to allow high external stocking rates for free range layers, making it cheaper for new entrants to set up units.

“We welcome this news and applaud the RSPCA for making the brave decision to adjust their standards in response to requests from the free range sector, packers and retailers,” said Martin Humphreys, managing director at Humphrey Feeds.

“This is a positive step and follows extensive consultation with various industry organisations. Although such actions must be encouraged, there should also be a degree of caution.”

“The number of birds that go outside is dependent upon a number of different factors including the type of system in the house, the season in which the birds were first housed as well as the quality of the range. If it is bleak with no cover then the birds will be more reluctant to venture outside.

“These new stocking densities will marginally reduce the cost of entering free range production and we will see an increase in the number of new free range producers as a result,” said Mr Humphrey.

“Estimates from a number of free range equipment suppliers suggest that orders for around 130,000 new bird spaces are currently being ordered per month, which equates to an increase of 1.5 million birds this year alone.

“This is due in part to a continuing strong demand for free range eggs, but it is also related to the grants available for free range producers in certain parts of the UK.”