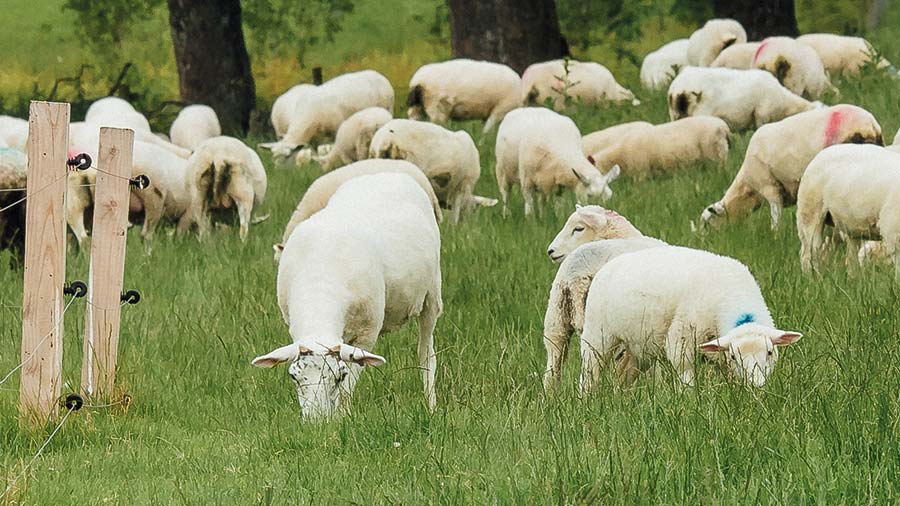 Weighing lambs more frequently and trialling a herbal ley has helped a farm identify a shortfall in iodine.

Richard and Laila Carruthers of Rawfoot Farm, Shap, Cumbria, were disappointed by growth rates in a mob of weaned lambs this summer.

They’d taken the decision to wean twin lambs a month or so earlier at nine weeks of age to give ewes a chance to recover body condition for tupping.

Lambs went on to a late April-drilled herbal ley, which, after a difficult dry spring, had recovered to look like a great lamb finishing feed.

However, after a couple of weeks, lambs seemed to be growing slowly, so they were gathered in late July to take some daily liveweight gains using an EID weigh crate.

See also: How to work out your flock’s trace element requirements 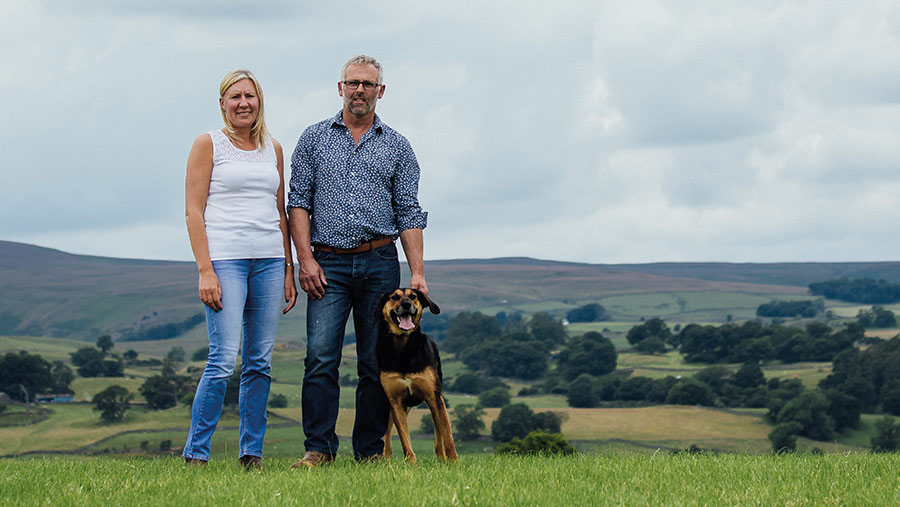 About 250 lambs were grazing a 3.6ha (9 acre) herbal ley, which was split up into six paddocks to rotationally graze on two-to-three-day shifts.

Lambs were only gaining 50-100g a head/day when they weighed the lambs at dosing, as opposed to the 250-300g a head/day the farm had hoped.

“Both the herbal ley and the extra lamb weights have been done in the last two years as part of the AHDB Strategic Farm programme,” said Mr Carruthers.

It was the first time they had drilled a herbal ley and the farm had only recently started weighing young lambs. Previously they only weighed lambs when drawing for slaughter.

“Lambs looked OK, they didn’t have mucky back ends, maybe some looked a bit dry, but we couldn’t figure it out,” said Mr Carruthers on a recent AHDB Strategic Farm webinar.

At about this time the farm had routine faecal egg count (FEC) results come back from the mob and the farm was advised not to dose for worms. Mr Carruthers asked his vets what was holding back growth rates.

What it is and what it does: Up to 80% of an animal’s iodine is stored in the thyroid gland, where it is incorporated into a hormone that controls metabolic rate. Hormones dependent on iodine are essential for growth and development of the foetus and lamb survival.

How to spot iodine deficiency: Many tell-tale signs are seen before and during lambing time. Low scanning rates and late-term abortions are possible. Lambs are weak with poor coats (not very woolly). Post-mortems at lambing can compare thyroid weight to liveweight. A ratio of 0.4g/kg being exceeded in lambs confirms iodine deficiency. Blood tests can be taken to gauge iodine levels.

What can affect iodine deficiency? Brassicas and legumes – particularly clover – contain goitrogens, which interfere with the uptake of iodine by the thyroid gland.

What risks are there of oversupplying it? Oversupplying iodine to ewes can result in increased lamb deaths in the first 24 hours due to reduced antibody absorption from colostrum.

Vet Rachel Tennant of Frame Swift and Partners, Penrith, suggested blood testing to see if they were lacking any important trace elements.

Six lambs had blood samples taken to test levels of copper, cobalt and selenium. A pooled sample was then taken at the laboratory to test for iodine levels.

The result showed copper, cobalt and selenium were within the ‘normal range’, but iodine was at 47 nanograms/ml – well short of the minimum 105 nanograms/ml.

The Carruthers were then advised to test thyroid function in ewes, to get a better picture of how iodine was affecting sheep on the wider farm.

This was done because the herbal ley (comprising red and white clover, plantain, chicory and Aber grasses) contained legumes, which are known as goitrogens that affect iodine uptake by the thyroid gland.

Results showed thyroid function was fine across all the sheep. However, the blood test found the ewes were in the ‘marginal’ range at 103 nanograms/ml.

Iodine deficiency can result in lamb mortality in young lambs (see box below), which Mr Carruthers said can often be a minor issue most lambings.

And while the tests cost over £300, it will be covered if four lambs are saved next year. “One thing to bear in mind is the length of time this takes,” said Mr Carruthers. “It took five or six weeks for the results to come back, so the problem can drag on.”

Note: Tests were done at Biobest. HiHealth Flockcare annual membership is £30. Members receive discounts for testing, which could be worthwhile if doing annual work such as parasitology, trace elements and screening bought-in sheep.

There are a range of options to supplement iodine with varying costs and practicalities. Options include free-access minerals, medicated water, pasture fertilisers, injections, boluses and drenches.

The farm has opted to use drenches on lambs every three weeks – which is time-consuming – and is looking at obtaining an import licence for a long-acting injection (iodised oil) from New Zealand that will cover lambs for one year at a time.

Ewes were also given a drench and a trace element bolus as a “belt-and-braces” approach before tupping. Two boluses/year are required at a cost of between £1.50 and £2 a ewe/year.

Potassium iodide crystals are mixed in water and supplied through a drench gun. This costs 2p a lamb and about 5p a ewe.

Growth rates recovered quickly to 200g/day, but about six weeks of growth was lost, something Mr Carruthers stressed is part of the learning curve of farming.

“If we hadn’t grown the herbal ley and been measuring lamb weights when we dosed them, we probably wouldn’t have noticed the iodine deficiency and it could have rumbled on a long time,” said Mr Carruthers.