Producing an 11ME silage can allow ewes to be fed a sixth of the amount of feed three weeks pre-lambing through supplementing rumen-protected soya, saving £3-£12 a ewe.

This is according to SAC Sheep Specialist Dr John Vipond, who says protected forms of soya can be fed at 50g a lamb carried a day and straight soya at 100g a lamb carried.

“One Shetland farm I am working with saved £12 a ewe on haulage alone,” explains Dr Vipond, who also reports a 600-ewe farm near Peebles, saving £2,300 on concentrate bills. 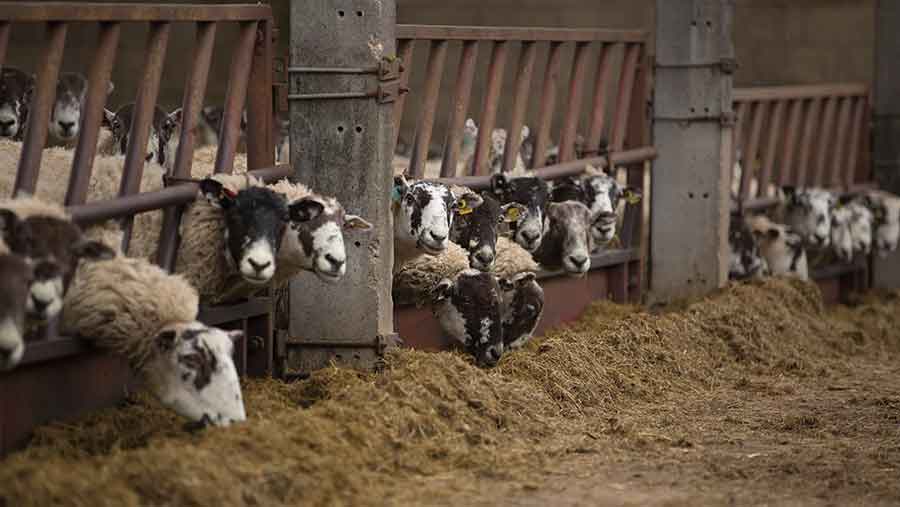 “Instead of supplementing ewe nuts at 0.6kg a ewe, farms only need to feed a sixth of the amount of rumen-protected soya,” explains Dr Vipond, who stresses that feeding lower-quality silage is fine until the crucial pre-lambing stage.

He recommends a simple feed budget of basic minerals and one big bale (650kg) of good (11ME) silage to sustain four to five sheep through the three- to five-week pre-lambing period.

SAC nutritionists stress that silage quality and good ewe condition are essential if farmers choose to feed soya. A starting point is to firstly analyse silage at 11ME so sheep get sufficient energy from palatable forage.

Protected forms are more expensive, but at around twice the amount of bypass protein, work out better and mean surplus protein is not being excreted by the ewe at a cost to her energy.

“If you have a good-quality silage it is cheaper to feed a protected soya product because this is less cost per unit of DUP.”

This approach requires sheep in good condition (BCS 3 or better) so they can produce milk “off their back”, while thin ewes (<2.5BCS) should be on straight soya, recommends SRUC researcher Professor Jos Houdijk.

“If farms are unsure about the consistency of their silage, with most at 11ME but some at 10-10.5ME then straight soya should be fed at 100g a lamb carried as this provides more energy than feeding protected soya at 50g,” he explains.

Feed quantities are saved because of the higher level of protein which bypasses the rumen for absorption in the small intestine.

Professor Houdijk says straight soya is typically 40-50% crude protein, of which a third is dietary undegradable protein (DUP) which bypasses the rumen.

By protecting soya, the proportion of DUP doubles “as a rule of thumb”.

Feeding 1.1-1.2kg of DM of an 11ME silage per day will supply 13.2MJ of energy, targeting a daily energy intake of 15MJ for a 75kg twin-bearing ewe in good condition, explains Dr Vipond.

The 100g of formaldehyde-treated soya she gets then takes energy just over 14MJ, so it’s “pushing the ewe to be efficient and mobilise fat reserves”.

He adds: “With diets a bit short in energy I would advise a straight form of soya – if your silage is 10ME then add in 300g/day of beet pulp nuts.

Furthermore, labour savings spent barrowing and bagging feed and waiting for wagons amounted to one entire day before and during lambing his 800-head mixed flock of mainly Texel-cross mule and half-bred Highlanders.

It makes you improve your silage and grassland management Bryce Mackellar

“We fed a 10.5ME silage to single and twins for three weeks, while the triplets moved to a better 11.5-12ME silage at two weeks housed,” says Mr Mackellar.

Ewes are housed six weeks prior to a mid-March lambing and fed square bale silage against a feed fence with intakes budgeted at 1.5-2kg/day. Twins and triplets are fed a formaldehyde-treated soya placed on top of the silage.

Three weeks before lambs ewes were then fed a high DUP formaldehyde-treated soya-based feed at 50g a lamb a day.

“Our vet did blood tests last winter and confirmed that the new diet maintained the right energy levels in the ewes.”

By cutting silage three to four weeks earlier, Home Farm is now getting more subsequent cuts and has gained a month of grazing on a 4ha plot.

“For this to work you need good-quality silage. It’s all part of an improved thought process about trying to make the silage an intensive dairy farmer,” explains Mr Mackellar, who likes sheep to be ideally at a body condition score of 3.5 at tupping and fall to 3 by lambing.